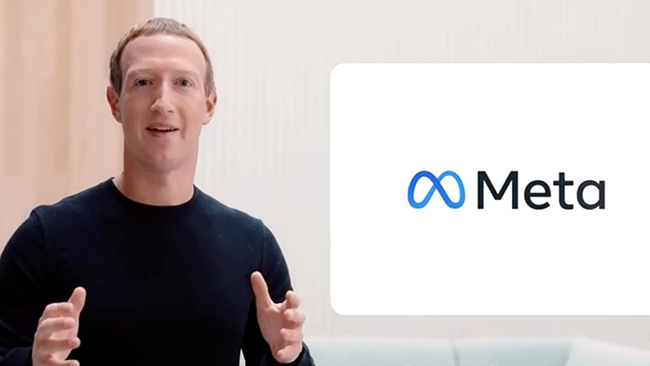 Mark Zuckerberg and his creation, Facebook, have been under tremendous scrutiny – from the public and Congress – since the leaked documents dubbed the “Facebook papers” revealed ways the platform ignored its own internal reports and the prospective damage it’s social network was doing.

Whether intentional or not, Zuckerberg at least temporarily deflected the attention away from the scrutiny and onto changes – including a name change – Facebook is making in an effort to embrace what Zuckerberg calls the “metaverse.”

Under its new brand, Meta, the social media giant is trying to encompass its virtual-reality vision for the future. Zuckerberg used a kickoff event Thursday by talking about a new social, gaming and workplace concepts for the “metaverse.” He also acknowledged what it looks like to focus on things other than the scrutiny Facebook is facing.

“Today we are seen as a social media company, but in our DNA we are a company that builds technology to connect people, and the metaverse is the next frontier just like social networking was when we got started,” Meta CEO Mark Zuckerberg said.

Meta’s stock price was up more than 3% on Thursday, CNBC reported.

In a video he made to kick off the Thursday event, Zuckerberg said he realizes some will say “this isn’t the time” to focus on the future.

“I want to acknowledge that there are important issues to work on in the present … There always will be,” Zuckerberg said in the video. “So for many people, I’m just not sure there ever will be a good time to focus on the future. But I also know that there are a lot of you who feel the same way that I do. We live for what we’re building. And while we make mistakes, we keep learning and building and moving forward.”

In a full-page ad Facebook took out in The Wall Street Journal, Zuckerberg – in a seeming bow to the Congressional scrutiny – said the company “supports updated regulations” on the Internet’s “most pressing challenges.” The ad says Facebook will invest some $13 billion in teams and technology to “enhance safety … security … and privacy.”

“We need clear guidelines to set the standards for all large tech companies,” the ad reads. “(We) support updated internet regulations, Reforming Section 230, breaking the deadlock on federal privacy legislation, protection against foreign interference of our elections and setting rules that allow people to easily transfer data between services.”

CNN reported that, during an earnings call back in the summer, Zuckerberg described the “metaverse” as a space similar to the Internet where users (via digital avatars) can walk around and interact with one another in real time. ​

“In the coming years, I expect people will transition from seeing us primarily as a social media company to seeing us as a metaverse company,” he said on the call, according to CNN.

CNBC reported the company has “ramped up its efforts” in hardware, introducing a line of Portal video-calling devices, launching the Ray-Ban Stories glasses and rolling out various versions of the Oculus virtual-reality headsets. The company has indicated that augmented and virtual reality will be a key part of its strategy in the coming years, the network reported.

Zuckerberg said a lot of this is a long way off but the company is starting to work on it and predicted that elements of the metaverse could “become mainstream in five to 10 years.” “Our hope is that within the next decade, the metaverse will reach a billion people, host hundreds of billions of dollars of digital commerce, and support jobs for millions of creators and developers,” Zuckerberg wrote in a letter on Thursday, according to CNBC.