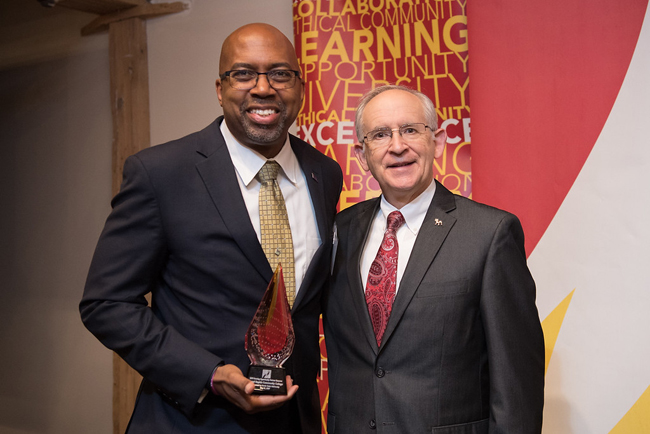 The number of Michigan public colleges and universities creating shared relationships is increasing, a point made obvious by the posting of continuous updates by Michigan Association of State Universities from across the lower and upper peninsulas.

But someone had to be first and that came in 1986 with a relationship between the Grand Rapids Community College and Ferris State University.

The initiative, the first two-year/four-year link-up, is being credited to Grand Rapids Junior College President Richard Calkins and Ferris President J. William Wenrich as the GRCC Applied Technology Center was amidst funding and construction.

While the unique West Michigan collaboration continues to be celebrated almost 30 years later, its most important aspect was underscored by Pink: “The product of that intentionality is an educated citizen.”

Remarking on his predecessors, Eisler noted, “They did something that had never been done before. … A student can begin their education right at home at GRCC and then — in the same building — continue with their education… still taking GRCC courses and taking FSU courses at the same time. That’s the beauty of this arrangement,” he said. And then he stressed that while the opportunity is commonly used by traditional-age students, Eisler added, “It’s a lifesaver for adult learners,” who budget time and resources between jobs, families and education. “We’re creating an educated workforce for Grand Rapids and West Michigan,” he emphasized.

Pink noted GRCC is the oldest community college in Michigan and one of the oldest in the country. He half-joked that after taking the office of president two years ago and seeing how the partnership worked, he wanted to call former colleagues to say, “Hey, guess what we’re doing!

Being intentional brought results
“It’s all about intentionality,” Pink emphasized, “That follow up must be there and must be sure. That’s what this partnership is all about, intentionality. It was a whole other thing (back then) to move into one’s building and then have people in that (shared) building collaborate.”

Pink pronounced, “The product of that intentionality is an educated citizen. A graduate. Someone who walks across the stage, walks into a job, walks into a career that is meaningful. And that’s why this partnership works.”

In 2001, the institutions signed a concurrent enrollment agreement and 10 years later inked a reverse transfer agreement that allows coursework completed at a four-year university to be transferred back to a community college, satisfying requirements for an associate degree.

The schools have also partnered to offer 2+2 and 3+1 programs that allow students to move more efficiently toward the completion of a degree.

Sustainability took a step forward with the 2007 installation of a “green roof” on GRCC’s building.

The two institutions re-signed an agreement in September of 2016, committing to continued learning opportunities for West Michigan students. And in early May of this year, GRCC Foundation campaign leaders celebrated having raised $12 million toward a $15 million community-based fundraising goal. The public-facing effort follows support from the State of Michigan and Foundation for scholarships and a 20,000-foot expansion of the ATC.

“Our work engages partner organizations that in turn make our programming more robust and valuable to students,” said officials from Ferris State. “The celebration showcases how FSU and GRCC work together to have a transformative effect and change lives — the positive difference innovative collaboration makes for area families.”

Both presidents left the podium of the May event, perhaps only rhetorically asking, “What’s next?”