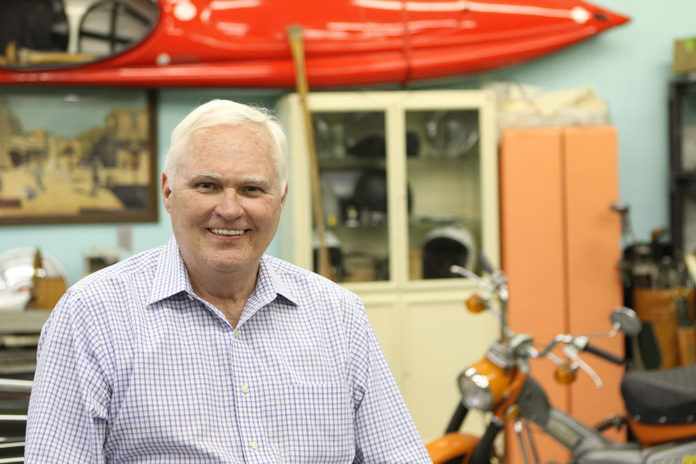 Bill Masters is an American engineer, inventor, manufacturing entrepreneur, and business advisor and mentor. He is widely known as the father of modern kayaking, but he’s also the father of 3D printing, holding the first 3D patent filed with the U.S. Patent office.

Today, Masters works to share his experience and insights with young people and a range of commercial enterprises. He also presents to academic, industry and professional groups, with a perspective that combines his humble roots, countercultural sensibilities and innovative approach to engineering and manufacturing.

Masters, who lives in Greenville, S.C., recently was inducted into the International White Water Hall of Fame. Today, he’s still inventing everything from non-drop honey dispensers to gun cases and is trying to use his story as an educational piece for other young entrepreneurs.

When you think of 3D printing, images of space-age shapes and maybe even a man named Chuck Hull probably get conjured up. Hull: the man widely dubbed as ‘the father of 3D printing.’ It’s true Hull – now 75 and still working as chief technology officer of 3D Systems – did patent a 3D invention in 1986, but two years earlier in the heat and humidity of Greenville, SC, the idea had already been born.

Masters founded and ran Perception Kayaks from 1975 to 1998. It was on the banks of a kayaking trip on the Chattooga River under the 76 bridge on the South Carolina side where he began thinking about spit balls (of all things) that eventually led to 3D printing.

“I was sleeping on the side of the river on my kayak looking up at the stars and I realized if you could take one star and make that your seed point, you could add stars from any direction until you had the shape you wanted,” he remembers of the time. “Similarly, if you shoot a spit ball down and it sticks, you can then shoot multiple down on top of it. They stick and stick and stick until eventually you can build something with them.”

This was in the 1970s, and it took him a few years to develop the idea and save enough to afford the patent. But by 1984, his “Computer Automated Manufacturing Process and System” was ready. He filed U.S. Patent 4,665,492 A on July 2nd – two full years before Hull patented his “Apparatus for Production of Three-Dimensional Objects by Stereolithography.” In fact, it was the first of five patents belonging to Masters that laid the foundation for the 3D printing systems used today.

Unfortunately for Masters, his name didn’t become the 3D staple Hull’s did. He founded Perception Systems that received seed funding from a South Carolina venture capital group, Palmetto Seed Capital. In a classic case of venture capitalist follow on funding, Masters lost control of his patents. The company was renamed BPM technology and burned through millions chasing complex software to control a simple process similar to what is the standard today. BPM eventually went out of business. Master’s kayak company on the other hand was booming, so he had lots to concentrate on.

Q: Why do you want your history with 3D printing known?

A: I actually didn’t realize I had the first patent until a few years ago or I would have started promoting the story sooner. Many people throughout history have been first when it comes to inventions but seldom are given the recognition of actually being first. I want my descendants to have this engraved in their family history that their granddad or great granddad was the first inventor of 3D printing. Family pride is important to me and I want to inspire future family inventors.

Q: What about 3D printing intrigued you?
A: I was laying in my sleeping bag on the side of the Chattooga River looking at the stars after a great kayak run on a wild and scenic river. I thought to myself, why can’t the stars just be directed to come together and make things? The ah ha moment was when I realized that yes they can, but they need a seed point or a point to begin. This seed point was a key element of my first patent ending in 492.

Q: What do you think the future of 3D printing is?
The future of 3D printing will hold working parts in many different industries. In the future when you buy products they will not be produced by suppliers through a supply chain, but the support will be cad files directed to a 3D factory that automatically makes these parts. An example would be a type of common tray in your refrigerator. Instead of the tray being an injection molded and sitting on a shelf in a warehouse it will simply be made on demand and shipped to your home. Just think of a factory with 500 3D machines all automated. This will be a common thing in the industry in 20 years.

Q: How do you cultivate your curious mind and spirit to be such an inventor?
A: I am lucky to have a family full of curious people who are all very self-sufficient. I have had the good fortune of finishing high school and then continuing with a degree in electrical engineering. All of my work has been science based which has kept me on a steady path. It’s like being an athlete whose muscles keep getting stronger as you age.