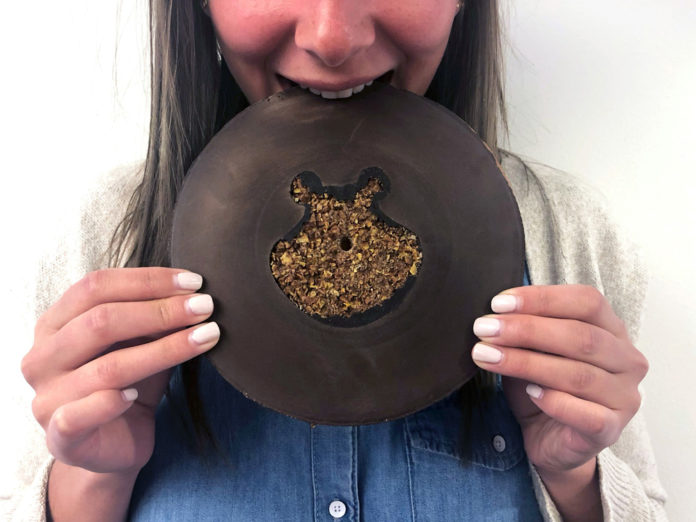 Food marketers and manufacturers have come up with some memorable advertising campaigns in recent memory. There’s the 7-Eleven “Bring Your Own Cup Day,” Lay’s potato chips “Do Us a Flavor” seasoning contest and the Dos Equis beer advertisement featuring “The Most Interesting Man in the World.”

Now, Battle Creek-based Kellogg’s has added a new layer to the food-marketing game. Believe it or not, but the cereal manufacturer recently created the first records to ever be made out of actual cereal with its Kellogg’s Chocolate Frosted Flakes.

The record, which features the new release “Hello” from Simon Cowell-based boy band PRETTYMUCH, is unique for a variety of reasons. First, it’s actually made of breakfast food. The vinyl-inspired record features a core of Chocolate Frosted Flakes, topped with layers of milk and dark chocolate.

Secondly, it truly looks like a record. Pressed in a 3D-printed mold to create playable grooves, the limited-edition record features a silhouette of Tony the Tiger, to showcase the crunchy, chocolatey Chocolate Frosted Flakes. Finally, it really does have a song on it. The record features the new release “Hello” by PRETTYMUCH, an iHeartRadio 2018 Best Boy Band nominee. For the full Chocolate Frosted Flakes experience, fans view an exclusive “Hello” music video featuring Tony the Tiger on PRETTYMUCH’s YouTube channel, and take the dance party on the go by downloading the song on iTunes.

“Through our music, we’ve always advocated for having fun and living your greatness in everything you do ’cause it’s just so important to stay true to yourself and have a good time doing it! So, we thought, what better way to do that than release our newest song on the first ever record made of Chocolate Frosted Flakes,” said Brandon Arreaga of PRETTYMUCH in a statement.

Kellogg’s made the record available to select fans who registered with PRETTYMUCH in advance. Fans also got a chance to meet the band at the Kellogg’s café in New York City.  Kellogg’s also made a limited number available in Chicago at Reckless Records’ Wicker Park location in honor of Record Store Day in April.

Reads like a crazy stunt? Well, food marketing has to grab attention to get noticed, and shoppers are easily distracted these days. For example, according to survey results from the Food Marketing Institute and analytics firm, Precima, shopper loyalty is more split than ever. Shoppers can go online, get deals from multiple stores and brands through text, email and more as well as face a huge array of new products nearly every time they go to a grocery store these days. So a chocolate record that really plays may be an ideal way to get their attention online, through iTunes and elsewhere, experts say.

What made a record like this possible? Part of that answer comes from the way the cereal itself is made. Unlike other chocolate cereals, Chocolate Frosted Flakes’ flavor is frosted onto the corn flake base, providing a chocolatey taste while maintaining a crunch. Kellogg’s worked directly with fans to test how different cocoas interact with balancing notes on the cereal flake and in the milk left at the bottom of the bowl.

Chocolate Frosted Flakes is available at all major retailers and grocery stores where breakfast foods are sold with a suggested retail price between $4.69 and $5.79.

With 2016 sales of $13 billion and more than 1,600 foods, Kellogg is one of the world’s leading cereal companies; second largest producer of crackers and savory snacks; and a leading North American frozen foods company.