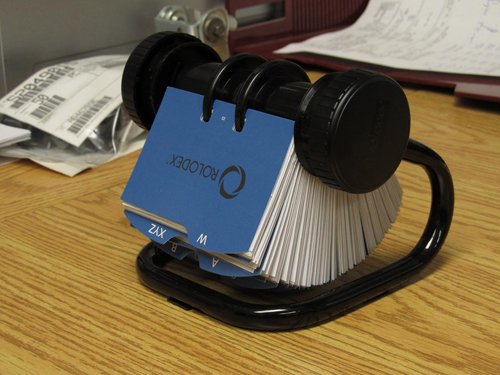 I’ve been in sales for 25 years, and on my own as a consultant/trainer for 10. I’ve seen a lot of hires go wrong, for a variety of reasons. Yet, there’s one phrase that has always (in my own experience) been a predictor of failure in a hire. In fact, a new client described a recent sales hire this way to me just yesterday:

It didn’t happen. It won’t for you, either, and here’s why:

1. “I have a lot of contacts” really means “I’m done making contacts.” When a candidate sells themselves as having the proverbial “great Rolodex,” what they really mean is that “My Rolodex is full of contacts – and I have no desire to make any more.” The salesperson expects to live off a base of contacts that have been made over a (typically long) career. What you don’t know – and won’t until after he or she is hired – is that many of those contacts are retired, moved on, not in their jobs anymore, etc. Worse, when it becomes apparent that the salesperson needs to make new relationships, it won’t happen.

2. The salesperson won’t aggressively pursue past contacts. Yep, the story gets worse for you. The salesperson values those past contacts and holds them in high esteem. At this point, they are the fruits of a (long) career. One of their innate fears is “burning” those past relationships – hence, don’t expect those contacts to be sold to with persuasion and enthusiasm. Instead, expect lots of socializing, reminiscing, and an “exposure” to your products and services – and if the old contact can get enthusiastic on their own, you might get a sale. If not, the salesperson doesn’t want to move aggressively because the old contact might not want to see him or her again. There’s a good chance, too, that the salesperson has oversold the quality of the relationships in the interview process.

3. There’s a big opportunity cost. This ties back to #2 above. Many times, those contacts are real, and many times, they can represent great opportunities – but you’re only getting a 50 percent selling effort on them. You’re better off having a salesperson with no prior relationship give a 100 percent effort than a salesperson with a relationship at 50 percent, particularly if yours is an advocacy sale (such as a new product rollout).

4. You’ll overpay. Again, this is nearly universal in my experience. The salesperson who markets their “Rolodex” rather than their abilities is a salesperson who is able to negotiate a more lucrative compensation plan. The hiring manager, envisioning a nearly nonexistent ramp up period and perhaps a best territory in the making, doesn’t worry about the ‘little things’ like an overextended salary, commission guarantee, and other perks, because the big numbers that the salesperson will generate will make up for it in short order, right? In most cases, wrong. And that’s money down the drain.

5. You’ll chase your losses. I go to Vegas about half a dozen times a year. I love the place. I seldom gamble; there’s too much other fun to be had there. But when I do gamble, I always see at least one gambler do one thing that turns a bad evening into a life changing event: They chase their losses. The smart gambler realizes that luck isn’t with him and walks away from the table. The not-smart gambler thinks, “I’ll keep borrowing money/writing checks/whatever, and I’ll win it back and then some!” You can guess the result. The same thing happens with the “Rolodex hires.” They tend to get a much longer rope than the average sales hire, and as a result, the mistake is more expensive. That’s because the manager is unwilling to admit the mistake and continues to think, “With that contact base, there’s got to be big bucks there!”

Why is this mistake made so often? Because it’s a shortcut, and shortcuts are seductive. The most expensive, and stressful, period of any new sales hire is the onboarding and ramp-up period. A hiring manager sees a “Rolodex” candidate and thinks, “I can bypass that whole problem, have a salesperson on board, and with just some calls quota will be met in months, not years!” It seldom works that way. In fact, in my experience, it never has. When you hire, remember the hiring hierarchy:

Traits first. We can’t coach personal traits, so the “trait fit” for the job is something that you can’t violate.

Skills second. Second, hire sales skills. We can teach these, but it’s nice if they have a well rounded skills package.

Experience third. Industry experience is the cheapest thing you can give a prospective salesperson. Recent experience should be used as a predictor of future results, but not as primary hiring criteria.

Hiring the Rolodex reverses this hierarchy – and results in failure.