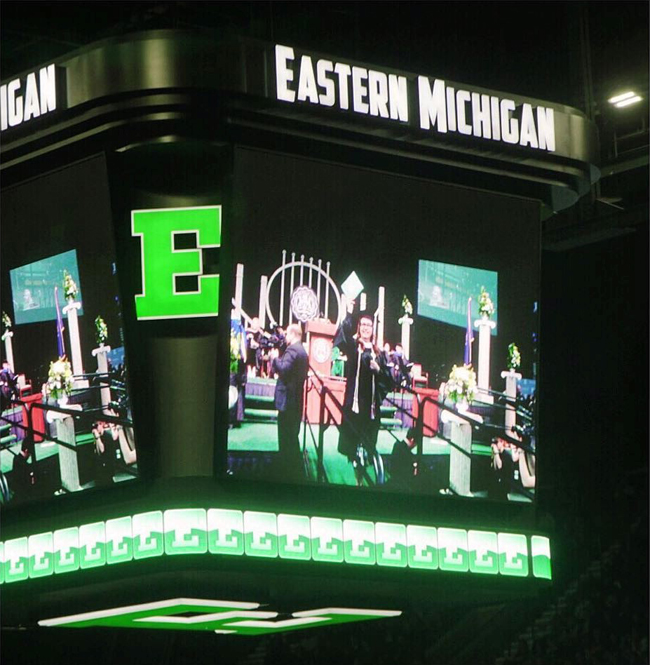 The Grosse Pointe Woods native recently completed her master’s degree in arts administration, with a focus on nonprofit leadership, from Eastern Michigan University, and she carries some $25,000 in student loan debt spent earning it.

Gavan, who also earned her certified nonprofit professional credential from the Nonprofit Leadership Alliance, said that while she’s “very proud of myself,” her level of debt is a huge concern.

“I’m now working a part-time job in the nonprofit world and several contract jobs in the entertainment world,” said Gavan, who now resides in Northville Township. “I am also on Medicaid because I don’t make enough money to afford proper health insurance.

“If I make too much money I lose my health insurance, but can’t actually afford a plan that covers what I need,” she added. “Between bills and working several jobs, I don’t expect to be out of debt any time soon.”

Gavan certainly isn’t alone, particularly among millennials. According to a study of 1,000 people between the ages of 23 and 38 conducted by LendEDU, a Hoboken, N.J.-based online service (www.lendedu.com) that helps consumers learn about and compare financial products, the average American borrower has nearly $28,000 in student loan debt.

It’s not just student loans
Student loans obviously aren’t the only way people are racking up debt. According to the study, conducted March 1-2, the average American owes $5,472 in credit card debt and has $201,811 of mortgage debt.

“It is no secret that in the United States, debt is a huge component of our economy and it is in abundance amongst American consumers,” said LendEDU’s Mike Brown, who uses data to identify emerging financial trends, in explaining the study. “If used responsibly, debt can be useful for emergencies and other times of need. However, it can spiral out of control quickly and leave borrowers in an inescapable position if they aren’t careful.”

As the cost of living in the U.S. increases, Brown said, Americans could need to take on more debt. This is especially true for millennials, the largest living generation, who are entering the prime of both their earning and spending years being between the ages of 23 and 38.

LendEDU surveyed 1,000 millennials, split evenly between three income brackets, on a series of questions related to the types and amounts of debt they carry.

Results are surprising
The results, Brown said, were “quite startling” — not only because of the sheer amount of debt that members of this generation were carrying — but also because “high levels of debt were reaching everyone, regardless of how much money they made.”

Among the things the study discovered:

Millennials in the middle income bracket, making between $50,000 and $99,999, were the most likely to carry credit card debt, with some 56 percent of this cohort carrying an average of $6,479. Half of the high-income millennials (earning $100,000 or more) had credit card debt; the average amount this group held in credit card debt was $8,040.

When it comes to student loan debt, all income brackets had similar proportions of millennials with that debt, but high income millennials by far had the highest amounts.

No guarantees
Gavan, the recent EMU grad, has a warning for those spending a lot of money on education: It doesn’t always get you where you want to go.

“I’m lucky to have found the positions I currently hold,” she said. “They are exactly what I want to be doing with my life, but what most people don’t understand is that this level of degree doesn’t guarantee you the perfect job and large salary right away.”

While the figures could be attributed to a number of variables, a likely scenario is that millennials in the uppermost income bracket received an advanced degree after receiving a bachelors. Medical, dental, law, or any type of graduate school is going to rack up your student loan debt balance quickly. However, any of those advanced degrees usually lead to a larger salary, which explains why they have the most student debt but simultaneously make the most money.

According to the study, millennials in the high income bracket are the most likely to be homeowners and also the most likely to have greater mortgage debt because they are likely purchasing more expensive homes, Brown wrote. They are also more attractive applicants in the eyes of mortgage lenders as compared to their counterparts due to their higher income.

Courtney Barbee, a 33-year-old millennial and the co-owner of a consulting firm, said she has some $300,000 remaining on her mortgage, but that’s it.

“I pay off the balance on my credit cards each month, and my student loans will be paid off in full next month.”

Kathryn Mancewicz, a 26-year-old millennial who is a personal finance blogger at MoneyandMountains.com, is working on paying off some miscellaneous debt with her husband.

“As of this year, we have paid off all of our student loan debt (some $40,000) and own three cars outright, one of which we just paid off (some $20,000),” Mancewicz told LendEDU. “We were debt free until we decided to purchase an RV so I can work as a traveling speech language pathologist.”

Other debt harder to figure out

So while the trends regarding student loan and mortgage debt can be explained, the other categories are a bit tougher to figure out, according to Brown.

For example, he wrote, upper income millennials had an average of $8,040 in credit card debt, more than the $6,479 owed by middle income respondents and the $3,793 average that represented the low income poll participants.

Granted, wealthier millennials may be in a better position to pay off debt when compared to their counterparts, but taking on a considerable amount of debt is never a sound strategy. A large salary isn’t a free pass to take on tons of debt, and compounding interest can turn a minor debt problem into a inescapable hole if it is not monitored diligently.

Additionally, too much can go wrong at any given moment that will make that debt a lot harder to tackle, no matter how much money one makes. For example, a medical emergency can quickly double that credit card debt in the blink of an eye. Or, a borrower could unexpectedly get laid off from his or her job, which would mean not having a source of income to pay off existing debt.

The “troubling amount of miscellaneous debt” carried by millennials only further exacerbates this generation’s debt problem, Brown wrote, something “made evident” by this survey.

“The U.S.’s largest living generation is flirting with a dangerously thin line that could turn bad very quickly when the next economic downturn hits,” Brown said.