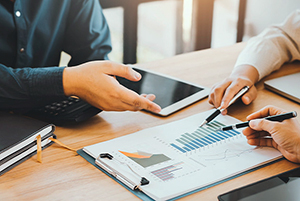 The economy downshifted in September but still performed better than expected. Nonfarm employment growth slowed to 263,000, the slowest since April 2021, though still faster than growth of the working population. The un-employment rate dipped back to July’s half-century low.

While job openings are coming down, they still outnumber jobseekers. Industrial production rose nicely, but will probably slow near-term since the benchmark manufacturing survey is at the lowest since the first half of 2020. And housing is correcting with 30-year mortgage rates around 7% and homebuyers’ mortgage applications down to levels last seen in the early 2010s. Headwinds overseas are increasing, too, from recessions in Europe and China, as well as from the strongest dollar since the early 2000s.

Despite a cooling economy, inflation surprised to the upside again in September. While gasoline prices fell in the month, prices of food rose, and core CPI hit a new multi-decade high. Inflation will stay very bad for at least a few more months. Gasoline prices edged up again in the first half of October, and home heating costs will be higher this winter as Russia-Ukraine pushes up prices of natural gas, heating oil, and electricity.

In 2023, inflation will continue to overshoot the Fed’s 2% target, but by how much is harder to say. Prices of industrial and agricultural commodi-ties have pulled back as the global economy has weakened, home prices are coming back down, and business sur-veys are reporting slower price increases; this should slow inflation.

Leaning in the other direction, price increases have become more widespread over the last year in ways that could persist into 2023, like in accelerating increases of sticky prices of services provided by small businesses, including car repairs, daycare fees, and piano lessons.

Upside risks to inflation will keep the Fed on the warpath for a few more months. They are likely to make a fourth consecutive 0.75% interest rate hike in November, then a 0.50% hike in December and a 0.25% hike at the next decision in early February 2023. Aggressive rate increases will compound headwinds from housing, inflation eroding consumer spending power, and weak foreign economies, making a recession by the end of 2023 a two-in-three chance. If a recession happens, job losses and pullbacks in business and consumer sentiment will probably weak-en wage growth and cool inflation by the second half of 2023, allowing the Fed to begin lowering interest rates.

Inflation and interest rates face both upside and downside risks. To the upside, the stickier inflation becomes, the longer it will persist in 2023, and the more the Fed will have to raise rates and squeeze the interest-rate sensitive parts of the economy, like housing, capex, and commercial real estate. To the downside, the economy might al-ready be weakening more than expected, fueling a faster drop in businesses’ pricing power, wage growth, and property values that could slow inflation faster than this forecast anticipates.