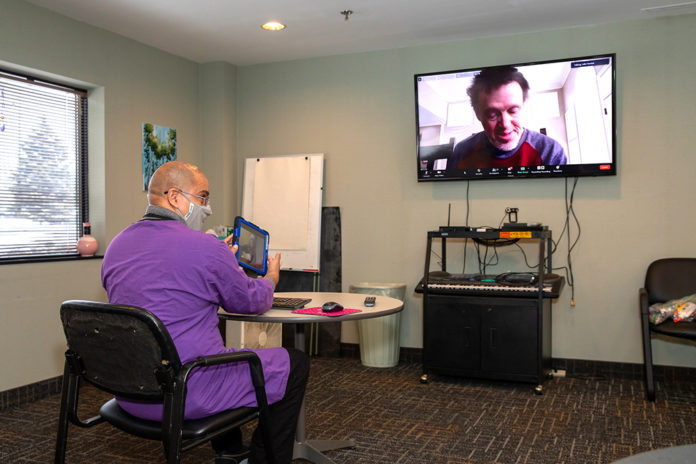 Back in the day, before the COVID-19 pandemic hit and changed the courses of so many lives, Ricky Lee would sit on his doorstep in Birmingham, lunch packed, and wait for the bus to come and take him to “work.”

That’s what Lee, 54, called Choices, a popular day program operated by JVS Human Services. Lee, who has Down’s Syndrome, had become attached to the staff and had many favorite activities. When the pandemic hit, Lee’s sister, Amy Montri, who takes care of Lee after bringing him back to Birmingham from an institution in Georgia, pulled him out of the JVS program.

“He absolutely loved Choices, it was like a day-camp for him,” Montri said. “We pulled him out at the beginning of March last year, slightly before things shut down. We knew he wouldn’t be able to communicate with us. It just didn’t feel safe to be sending him out into the world at that time.”

But now, officials at JVS Human Services have made programming available virtually, allowing those with intellectual and developmental disabilities served by JVS to reconnect with friends and the community with virtual programming.

As part of this new virtual Choices day program, an option called “JVS Frequency,” was recently launched to allow participants to join in and out of the program at any point, like listening to music on a radio station.

It operates on Zoom every day from 9 a.m. to 3 p.m., offering a variety of interactive activities including music, quizzes, cooking, behavioral support exercises, caring for animals and plants, mindfulness exercises to encourage relaxation and positivity, word searches and games.

In addition, “Choices on the Go” is another option where participants gain a virtual experience of taking a trip to a favorite local destination such as the Detroit Zoo or Greenfield Village.

“One of the hardest things for the people we serve is adapting to change,” said Nathan Volz, Manager for the Choices Program. “What they are going through right now has been a real loss: not meeting with their friends, engaging in daily activities, or experiencing community outings.

“They face a lot of challenges under typical circumstances, but the isolation caused by the pandemic has just made it worse,” Volz added. “JVS Frequency is a fabulous way to reach people and keep them engaged when it is convenient to them.”

According to Volz, some participants also have dementia and, due to the pandemic, less social connection. This combination has been shown to even impact a person’s lifespan, so adding daily enriching activities is vital for their physical well-being.

The program includes “mindfulness exercises, a lot of things like that,” according to Volz, and when people need a break from their sort of “heavier” activity, there are a lot of games and word searches, quizzes, things like that.

“That’s also really important because some of the people that we serve who have dementia, if they don’t have a lot of interaction, it has a physical impact on their health,” Volz said. A lot of people think of dementia as mental deterioration, but also your brain is slowly dying, so you have to keep people engaged to extend their lifespan. So we do a lot of interaction with folks to keep them healthy, as well.”

Prior to the pandemic, approximately 120 people with disabilities took part in Choices. Of those, 20 individuals who are able to follow pandemic safety guidelines and wear a mask, made the decision with their support networks to return to in-person programming at the Southfield JVS Human Services location; 77 others have been participating in Zoom programming.

For Montri, her older half-brother’s participation in Frequency has offered some normalcy back into both of their lives. Lee grew up institutionalized, unbeknownst to Montri, who believed his mother was taking care of him.

She discovered the truth in 2014 and took him from a nursing home where he was living in Georgia, to her family home in Birmingham, where he has been living ever since.  Montri, now Lee’s guardian, had no experience with caring for a person with disabilities but found out about JVS Human Services through an advocacy program.

“He absolutely loved Choices, it was like a day-camp for him,” says Montri. “He was so attached to the staff, had many favorite activities, and would sit on the door-step with his packed lunch every day, waiting excitedly for the bus to come to take him to “work”, which is what he called Choices.” For Montri, who has a school-aged son, this also gave her some much-needed respite time when she could run errands, as Lee cannot be left by himself.

The pandemic and cessation of the program left a big void for many metro Detroiters with disabilities. Lee was confused and asking Montri for “work.” Now that “JVS Frequency” is available on Zoom, life is much happier for Lee.

“It’s been fantastic, absolutely,” Montri said. “It’s something productive and enjoyable for him to do, rather than just be home watching (television) all day. It’s been a year since he’s been able to go. He enjoys having a routine and a schedule. We sign in at around 11 a.m. and, except for lunch, he stays on as long as possible.

“Ricky does need a lot of prompts to interact with people, but the staff are amazing and call out his name to engage him,” she added. “He particularly loves the music on Fridays.”

Participants in Choices are typically referred by their county supports coordinator at the age of 26 (or older), when they age out of the educational system in Michigan. For more information, contact Nathan Volz at [email protected] or call 248-233-4335.