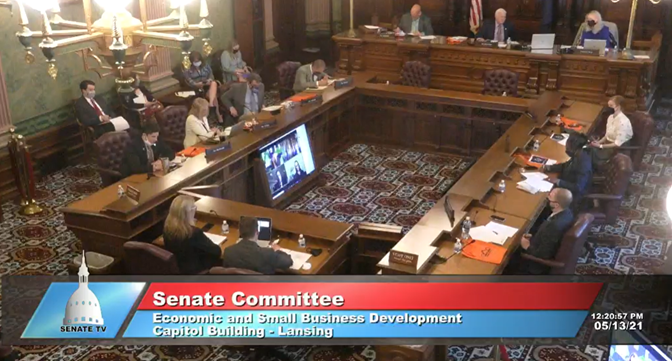 Grand Rapids – Officials from the Grand Rapids Chamber of Commerce, along with Executive Committee members of the Housing Michigan coalition, testified on the coalition’s work to the Senate Committee on Economic and Small Business Development.

The Housing Michigan coalition is led by the Grand Rapids Chamber, Home Builders Association of Michigan, Michigan Municipal League and Housing North and includes dozens of organizations across the state including businesses, builders, local governments and non-profits.

The coalition focuses on creating and expanding tools for local governments to support the development or rehabilitation of housing supply that is attainable to more Michigan citizens.

“The coalition came together around the question of what the state can do to improve housing outcomes in Michigan. Since then, our goal has been to bring down overall costs to positively impact workforce housing, because right now, there aren’t a lot of tools to do that,” said Josh Lunger, Sr. Director of Government Affairs at the Grand Rapids Chamber. “Our goal is to build a toolbox that local units can choose if, when, how, why and for what project they want to utilize it. There is no easy solution, but we think with this we can make things incrementally better in every community.

“There is a significant supply and demand issue. We need nearly 23,000 units by 2025 in Kent County, and the demand for those households earning $32,000 and $75,000 is in the tens of thousands just in West Michigan,” he added. “Those folks are forced to decide to either buy a home outside of their desired location or purchase down the ladder from what they can obtain. Although incomes in our region have grown more than 6% the average sale price of a home has gone up 68% and rent has increased 39% on average.”

“It’s more than a homebuilder’s issue, it’s a workforce, health and municipality issue,” Crandall said. “It touches everything.”

“As we look at the numbers for northern Michigan, we still see the need for thousands of units in the more rural parts of the states,” said Kent Wood, Principal at Borealis Strategic. “We are expecting 16,000 new units this year, but Sen. Schmidt needs half of those for his district alone.”

The common principles around the proposed initiatives include:

The Grand Rapids Chamber and Housing Michigan is urging the Legislature to quickly advance the legislation.

“We are thankful for the broad bipartisan support of these measures. Housing is such a foundational piece of so many systems and a high quality of life – health, jobs, income – which can be improved by sustainable housing,” Lunger said.