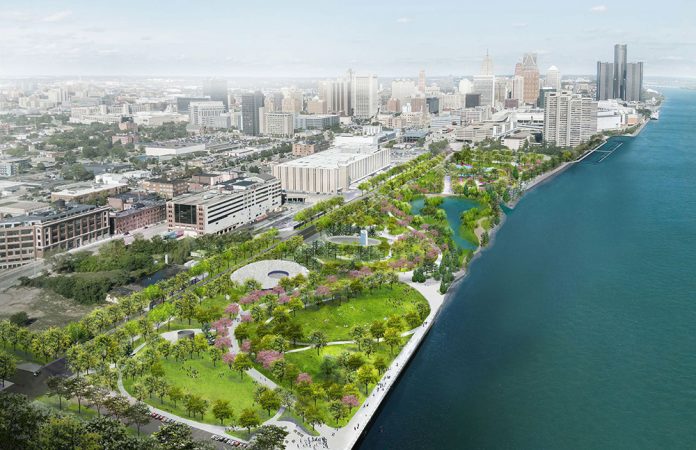 DETROIT (MAY 10, 2022) – The Detroit Riverfront Conservancy and partners broke ground today on the Ralph C. Wilson, Jr. Centennial Park, a 22-acre world-class park located on Detroit’s West Riverfront, marking a major step forward in the Conservancy’s goal of completing 5.5 miles of revitalized riverfront. Ralph Wilson Park will dramatically transform the Detroit Riverfront into one of the most beautiful public spaces in the country and is a $75 million investment for the community. The park’s name honors the legacy of the late entrepreneur, veteran and philanthropist Ralph C. Wilson, Jr. and will be completed in 2024.

“We have known for years that this part of the riverfront had tremendous potential, and the Ralph C. Wilson, Jr. Foundation encouraged us to dream big,” said Matt Cullen, chairman, Detroit Riverfront Conservancy. “Parks like this only happen once in a lifetime. Ralph Wilson Park will rank among the best parks in the country and have a profound impact on neighborhoods, and generations of Detroiters will gather together here and make memories that last a lifetime.”

Additionally, the Conservancy announced several gifts totaling $7 million from philanthropists in support of Ralph Wilson Park. Rachel Bendit and Mark Bernstein are providing a $1.5 million gift to support programming geared toward climate change awareness and are being recognized with a naming of the signature bear slide. The Mort and Brigitte Harris Foundation is making a $1.5 million investment in educational programming and will be recognized with the naming of the outdoor classroom. Sarah and Chip McClure made a gift of $500,000 to support the transformation of Ralph Wilson Park and will be recognized with a naming of the treehouse slide; and the Michigan Department, Environment, Great Lakes and Energy (EGLE) provided $1 million in support of the environmental clean-up.

In October 2018, the Ralph C. Wilson, Jr. Foundation announced a $40 million capital and $10 million endowment commitment to the Conservancy for the future Ralph Wilson Park. The Foundation also provided additional capital support to ensure key connections to the park could be made between the East Riverfront and West Riverfront and beyond with the addition of the Southwest Greenway.

“Today’s groundbreaking milestone would not be possible if not for the bold and ambitious vision set forth by the Detroit Riverfront Conservancy and their partners nearly 20 years ago to develop five-and-a-half miles of riverfront,” said David O. Egner, president & CEO, Ralph C. Wilson, Jr. Foundation. “The Conservancy has led with community voice in every step to plan the future Ralph Wilson Park – and paired with the incredible collaboration and support across multiple entities and organizations – will contribute to this park reaching its full potential as a beloved destination for Detroiters and visitors from across the region and beyond. It’s this dedication and teamwork that our founder Ralph Wilson valued very much throughout his life.”

“As a longtime patron of the Detroit Riverfront, I am proud to kick off the construction of Wilson Park,” said Lt. Governor Garlin Gilchrist II. “Michigan is full of unmatched natural beauty, and the Ralph C. Wilson, Jr. Centennial Park will be no different. Governor Whitmer and I have made historic investments in Michigan’s state and local parks, and we are committed to ensuring that every Michigander can experience and enjoy our natural resources.”

“Twenty years ago nobody would have believed that Detroit’s riverfront – with its cement silos and parking lots – would become one of the most beautiful and accessible waterfronts in the country,” said Mayor Mike Duggan. “But through the work of the Detroit Riverfront Conservancy, city government and countless partners, that’s exactly what we have. In just a couple of years, our riverfront will achieve true world-class status when the new Ralph C. Wilson, Jr. Centennial Park opens with its incredible amenities and physical features. Even better is the fact that it will connect to the Joe Louis Greenway, giving residents in neighborhoods across the city direct access to this extraordinary new park. Detroit is so fortunate to have been the beneficiary of this incredible gift from the Ralph C. Wilson, Jr. Foundation.”

The world-class Ralph Wilson Park will feature a water garden, the William Davidson Sport House, the Delta Dental Play Garden with an array of animal structures and the DTE Foundation Hill, an expansive lawn for special events.

The William Davidson Sport House will add to the public offerings on the Detroit Riverfront and features a raised canopy and skylight in a multi-use flexible space for a range of programs and events. The William Davidson Foundation granted $10 million in support of the Conservancy’s campaign.

“Great public spaces are at the heart of any great city,” said Darin McKeever, president & CEO of the William Davidson Foundation. “Ralph Wilson Park will be a thriving, wonderful place where generations of Detroiters and visitors can gather, play, exercise, and enjoy the beautiful outdoors alongside Detroit’s incredible waterfront. We are thrilled to partner with the community in this exciting effort.”

In 2019, Delta Dental of Michigan made a $5 million investment in a four-acre playground, the Delta Dental Play Garden. The playground will feature a large 20-foot bear play structure that children can climb up and slide down as well as otters, beavers and other imaginative creatures. The Delta Dental Play Garden will become a popular destination that will help young Detroiters spark a connection with nature and develop a life-long love for active living and recreation.

“The Delta Dental Play Garden will be a safe, fun and educational space for the children and families of Detroit and southeastern Michigan,” said Goran Jurkovic, president & CEO of Delta Dental of Michigan, Ohio, and Indiana. “Beyond fun and exciting, we fully expect the West Riverfront projects to drive economic development and energy just like the Riverwalk has done on the east.”

In fall of 2020, the Detroit Riverfront Conservancy and Huron-Clinton Metroparks announced a multi-year, pilot partnership. Through the partnership, Metroparks will establish a physical presence in Detroit and contribute $6 million to the Conservancy for expanded programs and operations at Ralph Wilson Park.

“We are excited beyond words to directly invest in the creation of a vibrant park in the City of Detroit that will, for the first time in our history, establish a Metroparks presence within the city,” said Amy McMillan, director, Huron-Clinton Metroparks. “The Metroparks are proud, and honored, to be included among the extraordinary partners and community members that have worked so long and so hard to make the dream of Ralph C. Wilson, Jr. Centennial Park a reality.”

DTE Energy Foundation’s gift of $2.5 million supports the DTE Foundation Hill, which is expected to become one of the most popular destinations at the park and home to special programming like concerts, movies in the park, outdoor fitness classes and sledding in the winter.

New York-based landscape architect firm Michael Van Valkenburgh Associates (MVVA) was selected as the winning firm of the Detroit Riverfront Conservancy’s international design competition to transform the 22-acre West Riverfront Park into the future Ralph C. Wilson, Jr. Centennial Park. The park is comparable in size to other MVVA projects, including Brooklyn Bridge Park in New York City and Maggie Daley Park in Chicago. MVVA is also designing a “sister” Ralph Wilson Park in Buffalo, NY, the other geography of focus for the Wilson Foundation.

The design for Ralph Wilson Park has incorporated one of the most inclusive community-led processes in which the public was invited to share their ideas and input. Leading up to the groundbreaking, the Conservancy team has hosted more than 100 community meetings.

Additionally, the Detroit Riverfront Conservancy assembled a Community Advisory Team (CAT) made up of 22 Detroiters who visited public places in world-class cities like Chicago, New York and Philadelphia so that they could report back on their experiences.

“Ralph Wilson Park will be a magnet that brings our community together,” said Mark Wallace, president & CEO, Detroit Riverfront Conservancy. “The best places in Detroit are those places where everyone feels welcome. Everyone who comes to Ralph Wilson Park will find a special place where they can express themselves and make memories.”