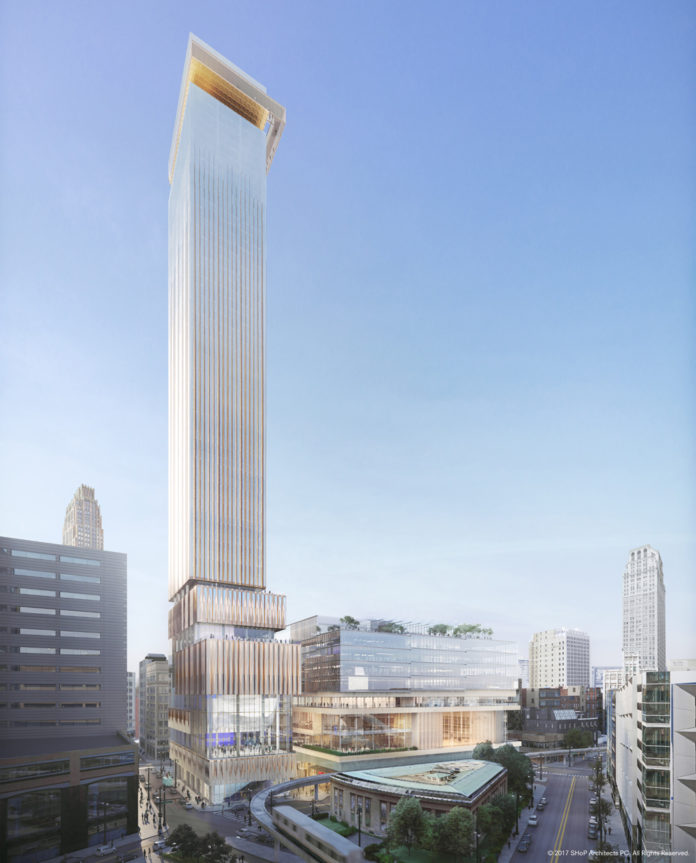 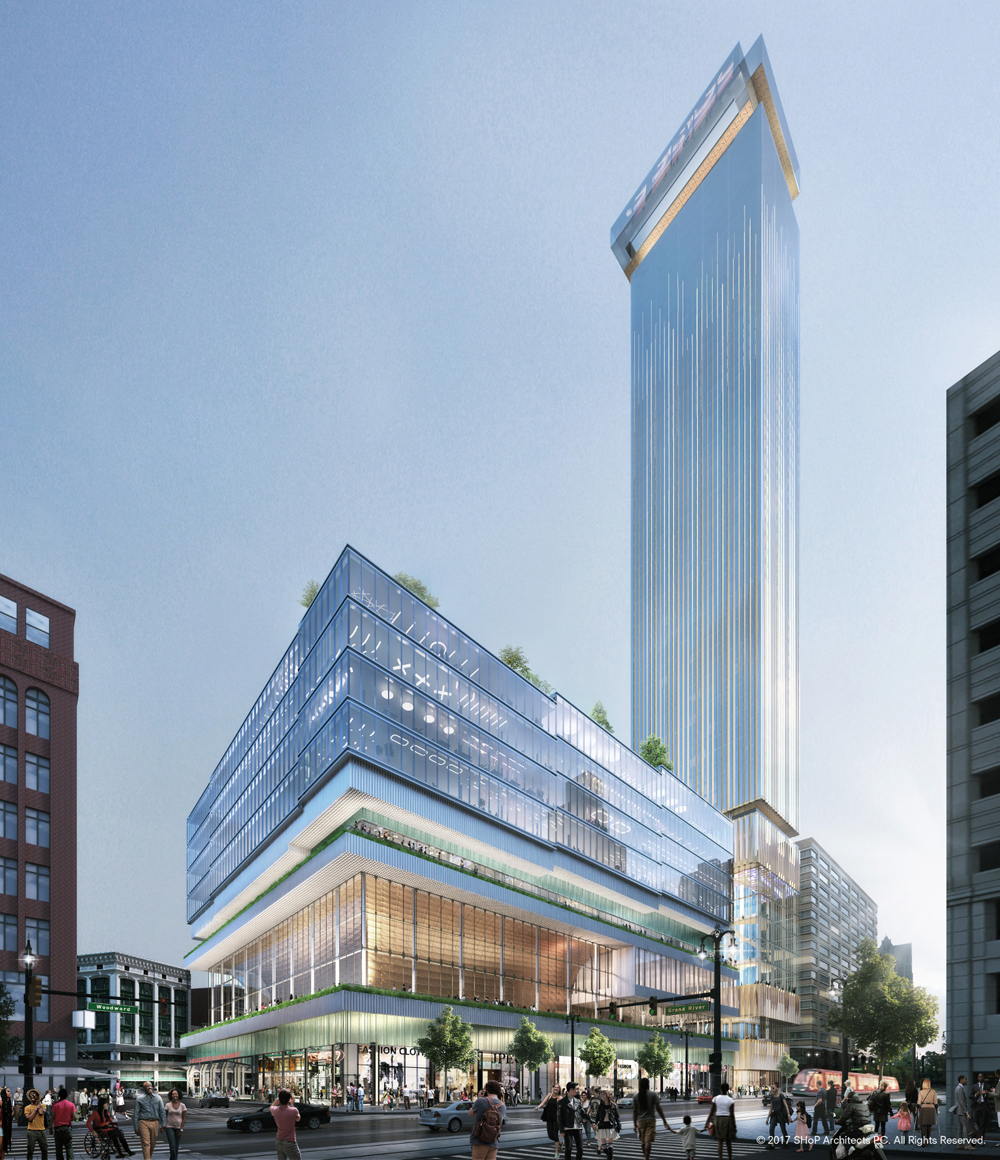 The loss of the iconic Hudson’s Department store in downtown Detroit has been felt for years now – but it only took a few minutes of groundbreaking and putting shovels in that hallowed ground for Detroiters near and far to see the site’s future.

In a ceremony at the development site, Bedrock and its construction, architectural and governmental partners broke ground on a $1 billion project on the land where the former Hudson’s flagship store sat. The new project will be 1 million square feet and the city’s tallest building, organizers said.

The former J.L. Hudson’s store closed in 1983 and had the distinction of being the world’s tallest department store during its run. Its property has been vacant for 25 years and the history of the building’s massive implosion remains local lore.

With the groundbreaking, the resulting development will serve as a hub for attractions, shopping, conferences, events, exhibitions, views of the city and region from a Skydeck 800 feet in the air, presentation theaters and more in Detroit on a site that is symbolic to so many across the region, Bedrock said.

“Today downtown Detroit is officially going vertical,” Dan Gilbert, Bedrock Founder and Chairman, said in a statement. “Not only do we need projects like this one to meet the significant demand for office, residential and retail in downtown, but this development becomes the 21st century version of what Hudson’s was to metropolitan Detroit for so many decades in the 20th century. In addition to creating opportunities for all Detroiters, this project will put our city on the radar of world class technology companies like Amazon and others.”

The scale of the project is designed to be a destination aimed at attracting residents, visitors, businesses and talent from across the city and around the world. The groundbreaking is an important first step toward Bedrock’s commitment to invest $2.1 billion in Detroit through four projects, company officials said. 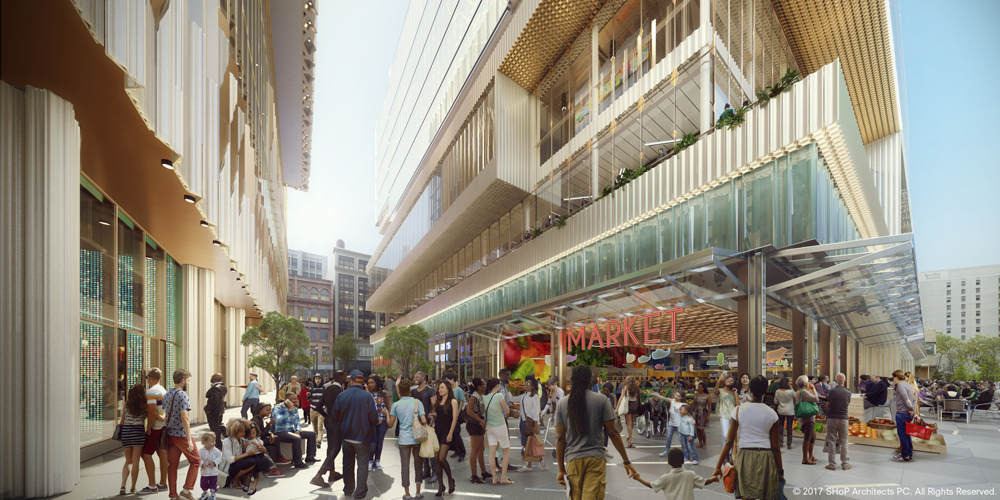 “When we hear people talk about what Hudson’s meant to them, the common theme is that it was a place where memories were made,” Bedrock President Dan Mullen said in a statement. “Bedrock is fortunate to have the opportunity to create a new landmark by providing all kinds of common and public space which is much needed in our city, and will be the location where innovation and the ideas of the future germinate.”

The project is technically two separate buildings: A 58-story residential tower and a 12-story building that will contain a ground floor market, a large, flexible exhibition space designed to accommodate a broad spectrum of events, conferences, technology attraction and more. The tower will have a capacity of 330-450 residential units, depending on final design and decisions around the size of each unit.

The project will also have 700 below-grade parking spaces. The vision for the development is to create an environment that allows people to innovate and collaborate on tomorrow’s great ideas, while bringing the best ones to life. A space where students will be inspired, where artists will display their creativity for the world, as well as a gathering spot where the community can come together.

A top-floor, multi-level public observation deck dedicates the city’s highest skyline views to Detroit residents and visitors alike. During the design process with New York-based SHoP Architects and Detroit-based Hamilton Anderson, Bedrock worked to ensure the project offered dynamic public spaces and an activated streetscape on all sides of the development.

This development fills a gap on Woodward Avenue and will dramatically increase the amount of people who take advantage of the walkability to the north to Grand Circus Park, to the entertainment district and beyond, to Campus Martius and all the way to the Detroit River to the south. It will also activate the area directly to the east anchored by popular restaurants and entertainment. 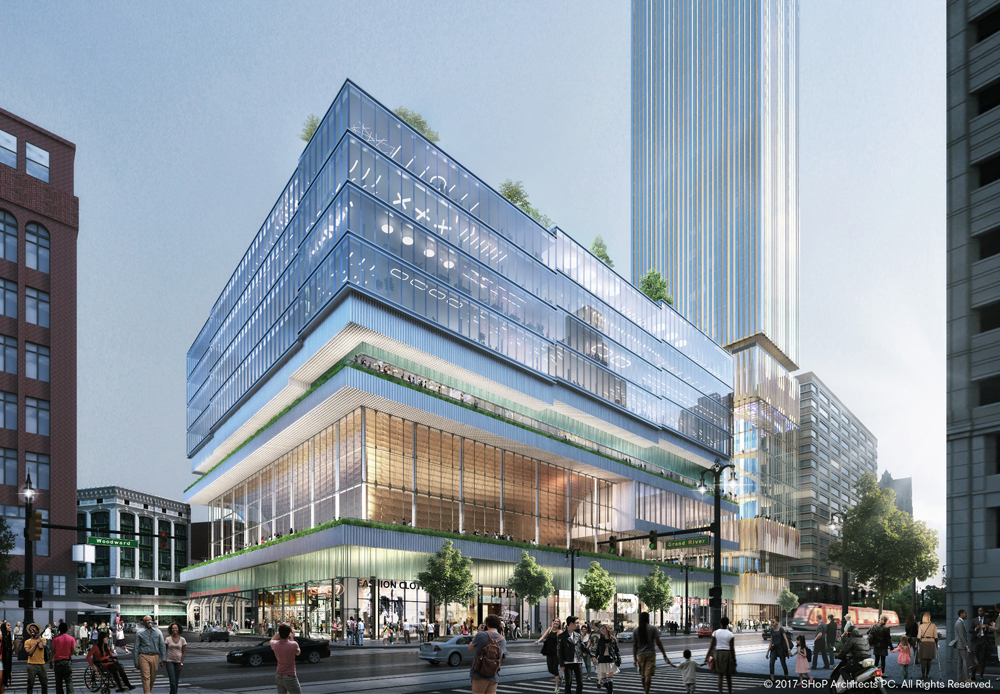