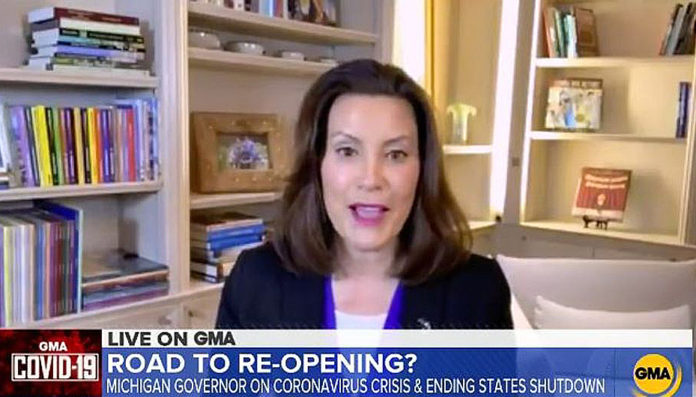 Michigan Gov. Gretchen Whitmer on Friday reassured the state’s residents and business owners that her administration and the regional partnerships her administration recently established are doing everything they can to set up plans that will allow Michigan’s economy to “re-engage” and potentially reopen in part by May 1.

Whitmer spoke in two locations Friday about the reopening plan: She appeared on the ABC television program “Good Morning America” as well as on a town-hall style telephone conversation with a variety of business leaders.

In those conversations, Whitmer said state officials are looking at a “data-driven approach to reopening,” and that the decision will happen when it is best for the health and safety of state residents. She noted that a second wave of infection would be “devastating,” and that her office is doing “everything we can to get it right.”

Because coronavirus cases seem to be leveling off and the “Stay Home, Stay Safe” quarantines seem to be flattening the curve, the state is in a position to restart the economy as long as four things are happening as well, Whitmer said. First, there needs to be sustained control of infections. Second, the state needs protocols to “test and trace” the virus. Third, there needs to be capacity within Michigan’s healthcare system if there are new or reinfections. Finally, businesses need to set up social-distancing practices within individual workplaces and industries to avoid further infections.

Slow rebuilding
The past six weeks have given Michigan and other states “a crisis unlike any other we’ve seen before,” Whitmer said, and her office is “doing everything we can to get (the response to this crisis) right.” She thanked businesses for contributing time, manufacturing abilities and products through private donations to this effort.

She also said the knows the resulting economic crisis from shutting down the state economy is an “intense and difficult time” for all businesses, large and small. Whitmer added that she understands “hard work is in our DNA” as a state, but that Michigan and the region needs to “safely phase in the re-engagement of our economy.”

“Over time, we’re going to get back to work,” Whitmer said. “Our restaurants will reopen. … But it’s got to be all hands on deck. We’ve got to be on the same team.

“I know we’re going to get through this,” Whitmer added. “We can shorten the time if we all work together.”

Whitmer said she plans on holding three press conferences next week — on Monday, Wednesday and Friday — to address how the state will reopen the economy and how businesses will be able to get their companies back up and running. She called this a methodical process and that individual sectors will be able to get started soon.

“No one’s more anxious than I am about that prospect,” Whitmer said. “I am hopeful that come May 1 we will make some steps forward.”

Michigan has the third most COVID-19 deaths nationally with 2,093 coronavirus deaths reported through Thursday.