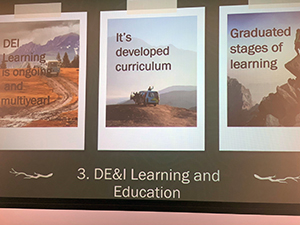 The phone calls, messages and requests started coming in to Darlene King about a year ago.

After nearly 20 years of success in helping business leaders build new Diversity, Equity & Inclusion programs both nationally and around Michigan, the National Diversity Council was being asked by organizations around the Grand Rapids area to help in West Michigan.

And the new council’s work started in earnest last week, when the WMDC hosted its first in-person events: A regional meet-and-greet at the University Club of Grand Rapids, followed by a lunch-and-learn event to discuss the 10 Key Benchmarks for DEI Strategy.

“We’re based primarily in southeast Michigan, but within the last year we received a large number of requests from business and community leaders to launch a West Michigan Council,” said King, the National Diversity Council’s executive director. “It’s an opportunity to engage with members of the philanthropic community and the business community.”

King, who has been with the council since 2014, said a racial and social justice component has been introduced to DE&I strategies since the May 2020 murder of George Floyd in Minneapolis, Minn.

New organizations are beginning the work.

“In education, this is a new space to have directors,” said Brooke Davis, director of equity for Kenowa Hills Public Schools. “They seem more prevalent in the business world. This will get some of that foundational work done and help us know how to integrate these practices into our district.”

King agreed, pointing out that strategies used by a school district might not work for Spectrum Health, or for Muskegon College or the Kent County ISD.

“This is not cookie-cutter work,” King said. “The needs are going to be different. The foundational principles of what should be incorporated is the same. You may need to tweak it for it to apply to your own specific work.”

Using surveys conducted among the National Diversity Council’s 350 partners around the country and globally, King shared the 10 biggest benchmarks in building a successful DE&I stragegy, including:

“It has to start with (leadership),” King said. “If it doesn’t, everything else goes by the wayside. If a leader says, ‘I’m committed’ … but they don’t provide resources, with staff, with a budget, they’re not publicly and visibly supporting the DEI effort, then that’s a ‘check the box” move.

“How do we know where we’re going if we don’t know where we are?” King asked rhetorically. “I’ve seen many organizations say, ‘We’re going to start our DE&I initiatives,’ but they have no idea who they are or who their employees are. Where are they when it comes to their readiness to accept this work? Where are the gaps? They just start doing things and they say, ‘this stuff doesn’t work.’”

“Organizations enter into this work and they haven’t … created a curriculum of educational training, and they cherry-pick what’s happened from a societal perspective,” King said. “You haven’t given people what they need in order to be successful. So when your DEI initiatives fall flat, now you know why. It’s all important, but you have to do it in gradual stages to bring the organization along.”

The problem? While there was a ton of recruitment, there was no room for advancement among the new hires.

“They brought in so much diversity … but they weren’t developing them and they weren’t able to retain them because there was no inclusion and there was definitely no equity as part of the work,” King said. “It’s important that you … also incorporate some development around your recruitment.”

“It is important to have programs internally that are ever-developing your employees,” King said. “These are some of the key strategies of organizations that have amazing DEI initiatives. It is a must.”

“This work is not just for the DEI officer; they can’t do it by themselves,” she said. “It has to be a council of influencers and committed key individuals who are going to help be the strategic leaders. It is imperative to develop a council at the executive level.”

“Employee resource groups are not for the purpose of food, fun and festival. We don’t do Taco Tuesday,” King said with a laugh. “Is cultural exposure a part of it? Absolutely. They are a huge part of your DE&I strategy but they don’t come first.”

The problem with focusing on employee resource groups for event purposes is that it might not work.

“This is not where you start. If you don’t have the (DE&I) foundation in place, this could backfire,” said Misti Stanton, vice president, DE&I, for Mercantile Bank. “For your organization to understand why it’s important for people to have space … when you’re focused on a particular identity of people, this could backfire if it’s not done right.”

“Covid has caused this to be a whole thing,” she said. “How are we attracting and retaining staff when workplace environment plays a huge role in it? You’re going to have to be creative if you want to talk about retention and recruitment. Work environment is a huge piece.”

Molly Phan is a branch manager for Lake Michigan Credit Union and part of the organization’s DE&I advisory panel. She was attending a diversity council event for the first time.

“I thought it would be useful,” Phan said. “There was a lot of information, and I think I can incorporate it into our program. I found it very helpful.”