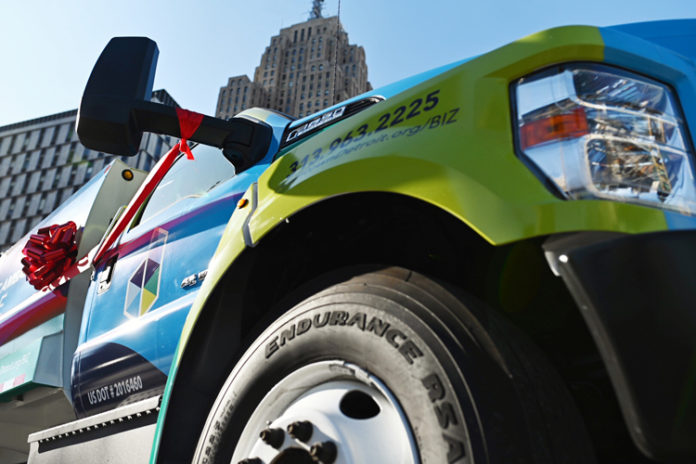 Detroit’s downtown has a new and powerful tool in its efforts to keep the area clean and safe for both residents and visitors, and it comes in the form of something you may not expect – a trash-compactor truck.

But this truck doesn’t only symbolizes the partnerships that make downtown Detroit such a force right now, officials say. It also shows the short- and long-term commitments these partners are making to setting a new standard for the city and its public spaces.

Innovative program
Detroit is the first city in the country where property owners who pay a self-imposed tax to support the BIZ have supported this kind of investment in a trash truck, explained Eric B. Larson, Chief Executive Officer of the Downtown Detroit Partnership (DDP).

Larson said this purchase highlights how hard the BIZ is working through its board and members to create a welcoming downtown and to be responsive to the additional clean-up needs that accompany the many events, programs and venues that are now active in that core zone.

“This (trash truck) is the newest addition to what is a system that is defining the standards and blasting a new path – and its the first we know of in any system around the country,” Larson said. “This allows us to continue to partner with the city of Detroit and our waste partners. It makes our collection process more efficient because we are able to reduce the cost and time (of gathering trash).”

Plus, keeping the dumpsters and trash receptacles emptied keeps the city looking great, especially during big events like the Detroit Tigers’ opening day or large events such as the Jazz festival.

Some background: In April 2014, downtown Detroit property owners approved the Downtown BIZ Plan, which establishes a formula for BIZ assessment calculations, rules for governing the election of board members and the scope of projects the BIZ will undertake. The BIZ charges the BIZ Board of Directors, a volunteer group of downtown leaders, with the responsibility of creating a budget that aligns with the BIZ service delivery goals and needs. The BIZ plan is valid for 10 years.

The DDP, which has been around for nearly a century, serves its members, residents and visitors through projects such as a clean downtown, park programming and many other services, Larson explained. The BIZ idea came about as Detroit hosted the 2006 Super Bowl and creating a beautiful downtown through clean and safe streets became a key initiative to that effort and for the city’s long-term residents.

Clean team
Since then, the Downtown Detroit BIZ Ambassadors remove an incredible 800 tons of trash throughout the city’s core on an annual basis, which provides a concrete rationale for adding the truck and a new employee to make sure this important investment is deployed effectively and with heart, Larson said.

That is where the BIZ’s new Ambassador Operations Manager, Eugene Carter, comes in, Larson said. Carter, who wanted to take on more responsibility within the city’s revitalization, brings to the BIZ extensive operations and environmental services experience in the city of Detroit, Larson said. He also brings a desire to help the BIZ Ambassadors learn new skills and become the best they can be, Larson added.

BIZ Ambassadors, more than 90% of whom are Detroit residents, help keep downtown clean and beautiful and assist pedestrians who need directions, restaurant recommendations and more. A third of the Ambassador workforce represent youth, seniors, veterans and people with disabilities and returning citizens from prison or related experiences.

“This is a team that’s become as much a family as anything,” Larson said. “It has shaped people’s lives and continues to give them not only hope but new skills.”