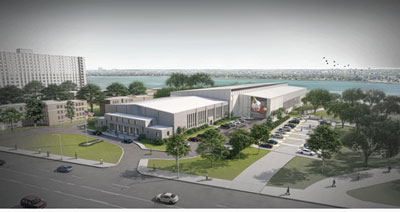 It is the kind of building that companies dream of working in: Large enough to have space for lots of creativity and collaboration, and a history that makes the city where it is located feel proud to have it not only functional but thriving.

That is the plan behind The Parade Company and its drive to buy, renovate and revive the R. Thornton Brodhead Naval Armory on Jefferson Avenue in Detroit, a property that is beloved by many but has sat largely unused for more than 15 years.

“The Parade Company is exploring our vision of an amazing new home in the City of Detroit. We have brought together a dedicated team who is committed to this project of rehabilitating the front portion of the Brodhead Armory and building on an additional rear structure after salvaging artifacts,” said Tony Michaels, President & CEO, The Parade Company.

“Our goal is to bring life back to a landmark jewel which will serve as a new home and studio for The Parade Company,” Michaels added.

There are many people and organizations that need to be on board with such an ambitious project, Michaels noted, but he hopes that everyone can come together to see the dream The Parade Company has for the property.

“We are at the beginning of the important and necessary process in taking the appropriate steps, given the fact that the building has been unoccupied for 16 years,” Michaels said. “We are respectful of this process, starting with the Historic District Commission this week and further steps with Detroit City Council upon approval. We will update the community at the appropriate time.”

City history
The Parade Company is best known for organizing major events around Metro Detroit, including Detroit’s annual Thanksgiving Day parade. That parade, sponsored by first-year presenting sponsor Gardener White, would be one of the major activities organized in this new facility if the proposed project comes together.

The 93-year-old organization also runs the Ford Fireworks, Hob Nobble Gobble and the Strategic Staffing Solutions Turkey Trot. The Parade Company has the support of more than 2,500 volunteers as well as thousands of people who have toured its current studios.

The Parade Company said it is looking to move because its current site on Mt. Elliott Street north of I-94 is “in a district that is becoming a transportation logistic hub with heavy semi-truck traffic.” Plus, “our studio is a portion of a former automotive plant. The Albert Kahn designed facility is in need of major work; in particular the saw-toothed roof system leaks like a sieve.”

Moreover, the proposal states that “being located in an industrial area has been a deterrent to attracting school tours. It is not the optimal location for family friendly, community orientated activities we host today and intend to increase to be daily.” It also wants to host community celebrations, such as weddings, graduation parties and the like.

Naval history
“The City of Detroit Historic Designation Advisory Board notes that the Richard Thornton Brodhead Armory stands as a reminder of Detroit’s sea service heritage since 1930. In the late 1920s Lieutenant Commander R. Thornton Brodhead, the head of the Michigan State Naval brigade, led a drive to establish a new armory,” the project proposal states.

The City of Detroit provided the land and a portion of the funding. Brodhead Armory has served the Navy, Marine Corps, Coast Guard, and their reserve and militia components. “Its historic significance is founded in its associations with influential members of Detroit’s Naval Militia community and in its art deco design by Detroit’s preeminent architect of the times — William Buck Stratton of Stratton & Hyde,” the proposal notes.

And, “During the Great Depression, artists were engaged on projects at the armory in 1939 and 1941. Projects included painted murals by David Fredenthal and Edgar Yaeger, a carved mural by Gustav Hildebrand, wooden doors and banisters carved by John Tabacanuk, and a reclaimed steel bulkhead from a mothballed ship,” the proposal says.

New traditions
The proposal, which includes a front-half restoration and a new addition, will cost an estimated $37 million, according to Parade Company officials and those familiar with the plan. The city of Detroit and its officials have not yet commented on the proposal.

“Nearing a century of Parade tradition, The Parade Company is dedicated to doing great things for Detroit, its residents and families. This new home would help energize the Jefferson corridor and be a beacon in the neighborhood,” Michaels said.

In its plan proposal, The Parade Company said it hopes to raise most of that funding by itself, a task that could take about 14 months or more. Construction would start after that date and continue for at least 24 months, the document said.

In that document, The Parade Company said it also hopes to work with its new neighbors in that area of the city, such as the Detroit RiverFront Conservancy, Jefferson East Inc, Rivertown Detroit Association and all city residents who are affected or interested in the project.