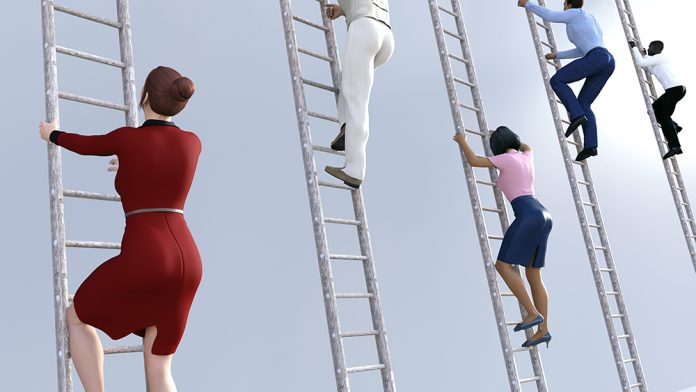 The 2022 Women’s Leadership in Michigan’s Public Companies report put together by Inforum is a bit of a mixed bag for Terry Barclay.

Barclay, Inforum’s president and CEO, is encouraged by the fact the bi-annual percentage of women filling C-Suite offices and corporate board chairs in Michigan’s public companies has climbed 3% in two years (Inforum combines strategic connections, proven professional development programs, a respected forum for new ideas, and original research to accelerate careers for women).

There’s a flip side to that, though: While a 3% jump is heartening, it still only leaves the overall percentage of women in leadership roles at Michigan’s 82 largest public companies at 24%.

“There is encouraging news, there is progress,” said Barclay, who has a bachelor’s degree in urban studies from the College of Wooster (Ohio) and an MBA from the University of Michigan. “A 3-percentage point jump in two years is significant. We’re really seeing an improvement there.

“But it’s not fast enough, given the talent pool that’s out there,” she added. “The report highlights the opportunity.”

Less encouraging to Barclay is the progress of women of color. Just 2.8% of all named-executive and board-of-directors seats are filled with women in color, according to Inforum.

That’s not new, though; Barclay says that number really hasn’t shifted since Inforum first started collecting data on women of color in 2007 (companies weren’t required to report diversity statistics before then, according to Barclay).

Other research shows perhaps some of the reasons why the numbers haven’t moved for women of color. McKinsey & Company, a global management consulting firm that advises on strategic management to corporations, governments, and other organizations, does an annual Women in the Workplace study. Its 2021 report, released last fall, reported women of color are being promoted at an even lower rate than white women and then men of color.

According to McKinsey’s report, women of color make up 17% of entry-level workforces; by the time you get to the C-Suite, that number drops to 4%.

“Women continue to face a ‘broken rung’ at the first step” up to manager, according to the McKinsey report. For every 100 men promoted to manager, only 86 women are promoted.

“As a result, men outnumber women significantly at the manager level, which means that there are far fewer women to promote to higher levels,” the report said. “The broken rung likely explains why representation of women at the senior-manager, director, and vice-president levels has improved more slowly than the pipeline overall.”

“Those numbers have barely moved in two decades,” she said. “The pool of qualified board directors would come from the C-Suites of the companies, and progress is slow there. That (2.8%) is not a good number.”

Darlene King agrees. While progress can be defined as forward movement, she said, it’s “obvious that movement is stagnant at best.”

“There is still much work to be done around including more women  in leadership/board roles,” said King, executive director of the Michigan Diversity Council, “and even greater work to be done for advancing women who identify as Black, Indigenous and People of Color.”

The Inforum report shows some progress for women. For instance:

The improvement is coming – albeit slowly – because of some “carrot-and-stick” initiatives that include pressure from investors, and regulatory components.

For example, Barclay pointed out, public company governance is really tracked, regulated and incentivized by government and by institutional investors:

“What really seems to be the force behind picking up speed is where there are incentives and that pull from the investor community to say, ‘We’re going to think twice about buying your stock if we don’t see some differences here,’” Barclay said.

The “carrot and stick” approach is necessary, Barclay believes, because research shows company performance is better “when there’s diverse leadership.”

One of the things slowing progress for women on the national playing field is what is described as “the funnel” in the McKinsey report. In its 2021 report, McKinsey points out that 47% of entry-level positions are held by women, and that percentage starts dropping the further up the ladder you go.

Other numbers show progress, according to McKinsey:

King believes a “strategic approach” much like what happens in Diversity, Equity and Inclusion programs, needs to be applied.

“Just like DEI programs and initiatives, a strategic approach must be applied for success,” she said. “That same strategic energy must also be applied to advancing women in these roles.  It’s not going to happen through osmosis. It is only going to happen with intentional actions which result in impactful progress.”

The top Michigan companies in terms of diversity included General Motors (it’s the only automotive company on the Triple Check tier) and Steelcase, Inc., both with 58% of women on boards; La-Z-Boy (50%), MillerKnoll, Inc. (46%) and Rocket Cos. Inc (43%) round out the top five.

“If someone showed up at your business and said, ‘I can add 6% to your bottom line,’ would you listen to that?” Barclay said.

But she says the importance of having more women represented in corporate leadership is also about businesses taking advantage of the role women play in the economy.

“Women are consumers, women in many cases are the ultimate consumers of the products and services that companies are producing,” Barclay said. “Women are key wage-earners and supporters of families. Having that voice at the table is really important to the future.

“I don’t know a parent who doesn’t believe that the sky should  be the limit for their daughters,” she added. “This is really about the American dream and creating that possibility.”