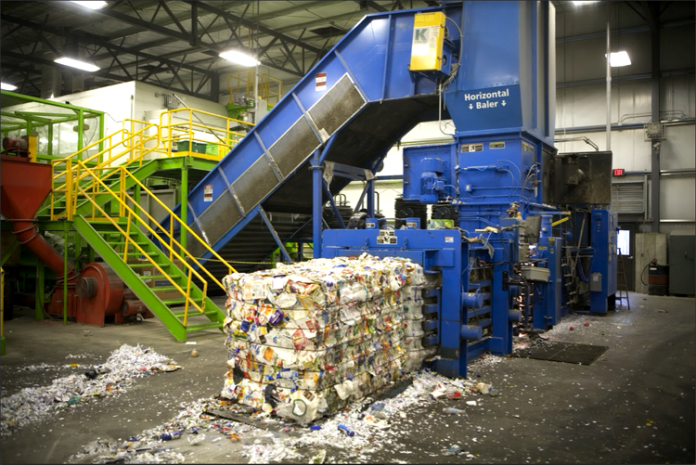 China, which once took some 30% of U.S. recyclables, has become less of a partner since raising its standards and making the decision to only take in materials cleaner than what most U.S. recycling centers are able to produce.

Michael Csapo, the general manager of the Resource Recovery and Recycling Authority of Southwest Oakland County, said the authority hasn’t been impacted greatly by the loss of China, noting it’s been awhile since the authority has done business with China.

“We haven’t sent any substantial amounts of material to China in nearly two years,” Csapo said. “(Our) materials are being sold into domestic and North American markets.”

However, the resulting hole in available markets has had an impact in many areas. Centers trying to adapt looking for a solution might take a look at what has been going on in Michigan’s Emmet County for decades.

Angela Crase of Republic Services, which handles the material recovery facility for the RROSAC, said the company was forced to find new markets, both in the U.S. and overseas, for their recyclables. There is one problem, though, she said.

“China had been a reliable partner for nearly 25 years,” Crase said. “Before January 2018, 30% of the recyclables processed by Republic Services went to China. Now that number is zero.

“The difference is that the values of those materials are far lower,” she added. “The world’s commodity markets are oversaturated, meaning supply is high and demand is low, which drives down prices.”

Strong relationships
Emmet County Recycling has spent decades building relationships with nearby facilities that buy processed recyclable material, Shepherd said. Unlike other recycling centers, about 95% of the material from the center stays in-state. None of it goes overseas.

“A lot of places just send it all away, they just want it gone,” Shepherd said. “We intentionally are seeking out markets. We want to find the closest markets possible.”

Shepherd said Emmet County distributes to several buyers, depending on what type of recyclable they’re looking to purchase.

Milk jugs are sent to Clean Tech in Dundee after they are processed and baled in Emmet County, he said. Clean Tech then cleans, shreds and pelletizes the milk jugs so they are ready to make new materials.

Meeting the challenge
Both the RRRASOC’s Csapo and Republic Services’ Crase agree contamination is the industry’s largest hurdle.

Across the country, about 25-30% of household recycling is contaminated,” Crase said. “That means 1-in-4 items are either soiled with food or other residue, or they aren’t recyclable in the first place. Aside from food and liquid, common contaminants include yard waste, hoses and even dirty diapers.”

But Csapo says the RRASOC has tackled the hurdle head-on.

“Our facility has consistently produced a product that meets whatever end-market standards are required by buyers of the material,” Csapo said. “Constant education using a multi-media, multi-modal approach that includes working with other stakeholders such as local communities, haulers, the state and the media” are measures that can be taken to ensure a contamination-free environment.

Emmet County’s Shepherd said one of the reasons in-state facilities want to work with Emmet County is the dual-stream method they use. While many centers will put all recyclables together, dual-stream separates cardboard and paper materials from glass, plastic and metal ones. This reduces the amount of contamination and makes the product more desirable to facilities buying the materials.

The Recycling Racoons, mascots used in Michigan to promote responsible recycling, is a step in the right direction, O’Brien said.

China didn’t start taking a significant amount of processed U.S. recyclables until the early 2000s, O’Brien said. After that, some centers adjusted to lenient contamination standards. With domestic markets overwhelmed by the new surplus of processed materials, centers will have to improve to appeal to these facilities.

Centers are slowing down the conveyor belts their materials are processed on to cut down contamination, O’Brien said. This leads to the production of a higher quality product, but it drives up processing costs.

Footing the bill
Excess supply driving down prices of processed recyclables combined with higher processing costs means that consumers are footing the bill. Late in 2018, Michigan lawmakers approved $15 million to be spent on recycling programs. O’Brien said that money is to be spent on education, modernizing facilities and growing domestic markets.

Emmet County is a leader in the recycling industry, but there will have to be some statewide changes for larger centers to follow its example, O’Brien said.

Many facilities Emmet County sells to can’t take in the quality or quantity of processed recyclables from these larger centers. This pressures the centers to produce a better product and creates a need for a larger market.

“We, at least in Michigan and I think across the country, are working on developing domestic markets and productive opportunities to use this material,” O’Brien said. “But it’s going to take time to do that.”

Despite the money and effort required, O’Brien sees new practices paying off.

“These smaller, more local efforts to absorb more of this material in Michigan and across the country are going to make way for better recycling,” O’Brien said.

Lucas Day of Capital News Service contributed to this report. Find his full report at http://news.jrn.msu.edu/2019/11/since-china-wont-buy-recyclables-centers-look-for-local-markets