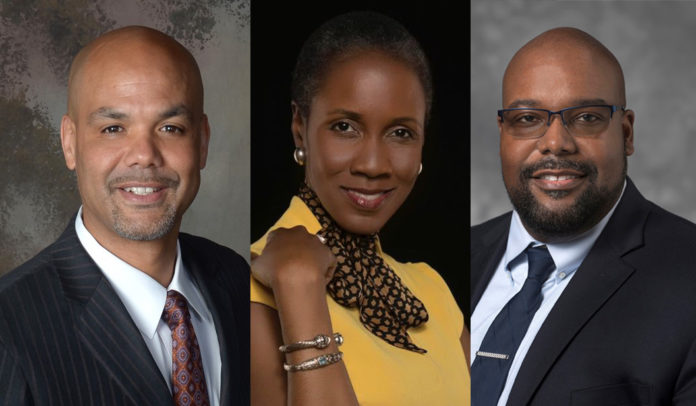 In the wake of protests against police brutality and racial inequality after the death of George Floyd in Minneapolis, and in the face of statistics that show the coronavirus has been more devastating to the African American population than any other, Clarence Sevillian has noticed an encouraging trend.

Sevillian, the regional president, Northern Michigan, and President/CEO of McLaren Bay Region for McLaren Healthcare has seen an increasing number of people wanting to get involved in discussions about how to improve things.

If what he called an “unprecedented” level of engagement wasn’t enough, there’s something he considers even more positive: Many of the people asking to get involved in conversations everyone agrees must be started, are not people of color.

“Over the past couple of weeks, we have seen an increased awareness, an increased level of engagement that has been unprecedented,” said Sevillian, who has earned master’s degrees in business administration (Lawrence Technological University) and physical therapy (U-M-Flint). “A number of individuals who were of non-color came to us and said, ‘I want to be a participant on the diversity and inclusion council,’ ‘I just didn’t know,’ and wanted to say ‘I want to learn more.’

“Having that courageous conversation is extremely important,” he added. “It’s an excellent first step to sit down across the table from your colleagues, sharing and being understanding. Organizations have to create that culture that allows you to participate.

One look at the statistics shows why the concern is there. Consider:

In addition to Sevillian, the webinar panel included:

Getting hit twice
King noted that the statistics surrounding African Americans and COVID-19, along with the killings of Floyd, Ahrmaud Arbery and Breonna Taylor, have been a double-whammy on Black people in this country.

“When we look at where we are in this space of COVID and the African American community, we have been hit twice,” King said. “We’ve been hit by COVID, and now we have racial injustices that have been going on for some time now, but in the last couple of weeks they have just really risen up where the entire world is really concerned with what’s going on in the African American community.”

Hurd said there are numerous factors that could play into the reasons African Americans are bearing so much of the brunt of the disease. Some are medical – a disease of inflammation, how it affects inflammation already in the body from other medical conditions such as diabetes or hypertension could make existing inflammation severe – but others are socio-economic.

For instance, Hurd believes African Americans in many instances have been treated differently throughout the pandemic, noting cases where Blacks have been turned away from testing sites because their symptoms didn’t warrant a test, and told to go home “and tough it out.”

“Another reason is the bias, maybe in some instances implicit bias,” Hurd said. “We’ve heard story after story after story of African Americans going to testing sites, to ERs, seeking care … When you think about just those two things, and those impacts, that’s two contributing factors why the rate is so high.”

Lack of trust
Lipscomb said there’s also often an inherent lack of trust between African Americans and the healthcare system, dating all the way back to the Tuskeegee Study of Untreated Syphilis in the African American Male, conducted between 1932 and 1972 by the U.S. Public Health Service, when the men in the study were told only that they were receiving free health care.

Lipscomb said he recently read a statement in a blog circulated in the Detroit area he found powerful: “Detroiters lack the privilege to socially distance.”

“When you look at the African American community and you talk about structural racism, there’s also a lack of trust with the healthcare community,” Lipscomb said. “I thought (the blog) was pretty profound, and there are a lot of different elements to it in terms of lack of access to nutritious food. Many African Americans are in service industry types of roles, so they were viewed as essential workers, and when they were sick they didn’t have the level of benefits that would allow them to take sick time.

“There was a lot of misinformation occurring when the coronavirus first struck, even information saying they could not catch the actual virus,” he added. “I think misinformation, lack of trust, lack of access, (all contributed).”

King pointed out the pressure is on human resource teams, who need to look at their diversity recruitment, and hiring and succession planning as companies bring on talent from a more diverse pool so workers so “able to have better access to better healthcare.”

Trust is the key
Sevillian agreed, but pointed out addressing the root of the problem – building trust – is “where the key lies.

“It’s easy to say ‘go ahead and improve your overall access to health care’ or ‘everyone can have health care insurance’ and that’s going to address the issue, but in fact it’s not true,” he said. “It’s much more widespread. Building that trust is extremely important. We have to better educate the communities we serve. We have to be out there. We have to give certain examples, we have to make sure we have access and we’re doing those sorts of things that are real-time and make sure we’ve stretched far enough to have that kind of an impact.”

Hurd said racism “is actually a social determinate of health,” because of the stress it causes because of what African Americans “have to deal with every single day just to survive.” That stress, she pointed out, has especially come in the last few weeks because of COVID-19 and the racial tension in the wake of Floyd’s death.

“In a lot of instances if you think about the African American community right now, you have the stress and grief associated with COVID-19,” said Hurd, who said she personally knows – either directly or one person removed – of 20 people who’ve died from COVID. “When you think about the racial tensions, and the things we have to contend with, not just now, but always, there’s a trauma that we need to be aware of that could be developing at this moment with everything that’s been happening the last three months. We carry that in our bodies. When you think of things like hypertension, and the disparities, that’s one of the factors that contribute and lead to that.”

Ongoing training
One participant pointed out that many west-coast tech companies are implementing unconscious bias training in an effort to combat bias and maximize inclusion.

The panelists agreed that could be a key part to at least getting the conversation started. Hurd talked about how Blue Cross Blue Shield of Michigan is expanding its learning about the LGBTQ+ community to prepare care managers and customer service representatives to help with questions from that community.

“I would say it’s a good first step …. It shouldn’t be singular,” Hurd said. “At BCBS throughout the year we take opportunities to learn about one another, and that’s really the key. The more we learn and truly understand about different cultures, different communities, that’s the difference it can make. Ongoing learning is the foundation for beginning to get rid of a little bit of that unconscious bias.”

But it can’t be a one-time thing, Sevillian said, or staffers could “roll their eyes” thinking it’s just one more box they’ve got to check off.

“It is absolutely important to do the ongoing learning when it comes to unconscious biases,” he said. “Most times (bias) is not intentional … folks just don’t know, are not aware or not in touch with everything that’s happening or what’s important to not only our workforce, but to our providers and the communities we serve.

“We can’t just have a one-and-done … ‘we did our training, we got it over with and on to the next thing,’” he added. “It certainly has to be intentional, something that has to be imbedded in our culture. It’s something we have to live and breathe and show it’s truly important to us, because we get lost in all the day to day activities. If we do not make it a part of our culture … unfortunately, it gets lost, and we can’t connect.”