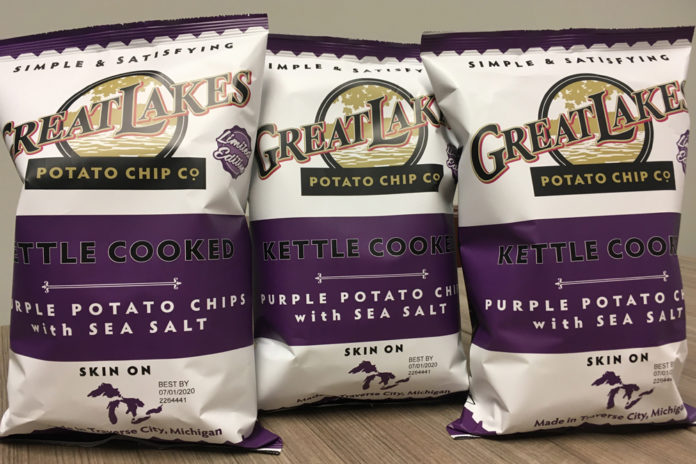 Some companies celebrate their anniversaries with a big party. Some offer a coupon or discount to shopper. But Great Lakes Potato Chips Co. took their 10th year anniversary to a new level – they’re going purple.

The Traverse City-based food company worked with Michigan State University researchers to use their unique “Blackberry” potato to develop a purple-hued potato chip. The chips are now on sale wherever Great Lakes products are sold, including retailers such as Kroger and Meijer.

“We wanted to do something unique to celebrate our 10th anniversary,” Chris Girrbach, president of Great Lakes Potato Chips, said in a statement. “We thought purple potato chips would be a good way to highlight all the work MSU does and the growers that helped us get started.”

A special spud
“I always saw that there was a need in the specialty market for a good purple-pigmented flesh variety of potato,” Douches said in a statement. “There were some old varieties around in the past that I felt didn’t really serve the market well, so we made an effort to try to improve on that.

“We were trying to find ones that had a round shape rather than a long shape, and also ones that had some disease resistance, as well as a deeper purple flesh color.”

Girrbach and Douches work with Iott Farms in Kalkaska, Michigan, to grow and harvest the Blackberry potatoes used for chip processing.

“Since we’re a small producer, it’s a little easier for us to do something like this,” Girrbach said.

Girrbach said the purple potato chips serve as a thank you to the communities and Michigan agriculture partners who help support Great Lakes Potato Chips.

“Michigan growers are awesome,” he said. “MSU in particular puts a ton of research into potatoes; they work so hard to do stuff like this. I just hope people see how fun the research can be and how important growing it is.”