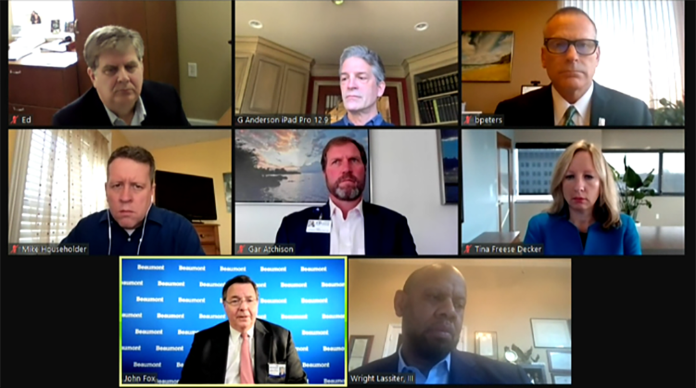 As the COVID-19 pandemic rages on – Michigan has seen a spike of more than 200% in hospitalizations – and hospital systems on the west side of the state climb toward maximum capacity, the leaders of the state’s major health systems banded together Thursday morning to deliver a familiar message.

With all the state’s COVID-19 numbers surging (the state said there are now more than 236,000 cases and 7,811 deaths), health leaders took part in a Zoom call to urge Michiganders to do the same things government leaders have been saying since March: Wash your hands, wear face coverings and practice social distancing.

“We’re here to ask Michiganders to support essential workers in health care with the kinds of practices that will help us help you,” he added.

Henry Ford Health System was one of the systems “hit very, very hard in the spring,” with more than 1,000 COVID-19 patients in the system at the peak.

The press conference happened as Michigan sees record-breaking new case numbers and a surge in hospitalizations from the virus. The state has seen a 215% hike in COVID-19 hospitalizations, a 146% rise in the number of patients on ventilators and a 137% increase in ICU patients, according to statistics provided by the health department.

With hospitalizations surging, systems like Henry Ford and Beaumont have begun limiting visitation in an effort to stop further spread.

And this comes as hospitals in West Michigan are nearing capacity due to the coronavirus.

Brian Peters, CEO of the Michigan Health and Hospital Association, which represents all hospitals and health systems in the state, called the rate of hospitalizations “alarming.”

“We are squarely in the midst of a public health crisis,” Peters said. “Our hospitals are rapidly filling with COVID patients at a very alarming rate. If this continues in the coming weeks, we will surpass our all-time record high in terms of COVID in-patient hospitalization numbers.

“Truly we need all Michiganders to do those ‘big three’ activities (masks, hand washing, social distancing) as we combat this terrible virus,” Peters added. “I’m very optimistic that if we do come together in that regard … we can be successful at the end of the day.”

With the Thanksgiving holiday two weeks away, state health leaders are urging the public to follow suggested guidelines. The CDC recommends Thanksgiving only with immediate family members.

“Given what we’re seeing here in West Michigan, we are very fearful that if big groups start getting together the spread will go on even further,” Elmochi said.

Spectrum Health CEO Tina Freese Decker, whose system includes a dozen hospitals, said Thursday that the systems’ testing positivity rate – the number of tests conducted that result in a positive finding – has climbed to 15%, up from 3% in September.

“We’re trying to continue to slow the spread and flatten the curve so we can continue to care for our patients and people within our community,” Freese Decker said. “It’s a much different situation than we had a couple of months ago.

“One of the good news is we aren’t seeing the demographic disparity we did see in the spring,” she added. “It’s affecting all populations. That’s why it’s critical to come together as communities to practice the things we know that work, but also limit the in-person gatherings so that we can flatten this curve.”

Metro Detroit numbers are also climbing fast. The last three weeks have seen a 193% rise in COVID-19 hospitalizations and an 83% spike in patients on ventilators.

Statewide, numbers are also climbing in the wrong direction, surpassing records set back in the spring. That’s different from early in the pandemic, when spikes in the virus were largely concentrated in the metro Detroit area and urban populations.

“What is different than back in March and April, where this was a situation that was really focused in Detroit and urban areas, it is now throughout the state,” said Ed Ness, president and CEO of Munson Healthcare, a multi-hospital health care system in northern Michigan. “We are (now) seeing the same spike that we were seeing in urban areas. Because it was isolated before, I think the rural communities felt they were isolated and protected. Recent data has shown it doesn’t matter where you live … you’re facing the same situation.”

Gov. Gretchen Whitmer, at her COVID-19 update press conference later Thursday, agreed with Ness’s assessment, that everyone is subject to the disease.

“I’m not going to sugarcoat this … we are in the worst part of this pandemic to date,” Whitmer said. “No matter who you are, or what community you are in, it’s important to know you are vulnerable to this virus. You can show symptoms, you might not show symptoms. You might survive, you might not. None of us knows, and that’s the scary thing about this virus.”

But he did point out that rises in cases in other countries did not prompt any further shutdowns.

“We’ve been watching this case rise in other countries and other states, and what we’ve seen there is when cases get on the pace of increase we’re seeing now in Michigan, those countries have not reverted to the sorts of broad economic shutdowns that everybody did in the spring,” Anderson said. “They’ve been much more targeted where government did intervene. Generally, they’ve intervened to shut down social interaction, because that is where the spread is occurring.”

Responding to a question about whether these measures would be enough without further government intervention – after all, Michiganders have been following them, for the most part, since March – Beaumont’s Fox said that no one wants to go backward.

“None of us want to go through the shutdown and the brute force of what happened in the spring,” John Fox, president and CEO of Beaumont Health. “I do think government and all of our communities play a critical role in reinforcing the way we can control this virus.

“The virus doesn’t move on its own,” Fox added. “It spreads through us … our behaviors, our patterns. The tools to control it are there, they’re all accessible, and we have to constantly emphasize that in every way we can. I don’t think any of us want to see a lot of regulation drop down on business, social activities and other things. But we can’t be tone-deaf to the reality of this virus, and the massive impact it can have, clinically and otherwise, on Michigan. This is a very serious situation.”

Whitmer echoed the sentiments expressed by the medical leaders, and also added her own dire warning.

“Unless we get our act together right now, we could be hitting our daily peak of deaths in Michigan come Christmas,” Whitmer said. “The numbers tell the story. None of us needs a judge or an executive order to make smart decisions for ouselves and our families. There are real, concrete steps we can take to get this under control.”