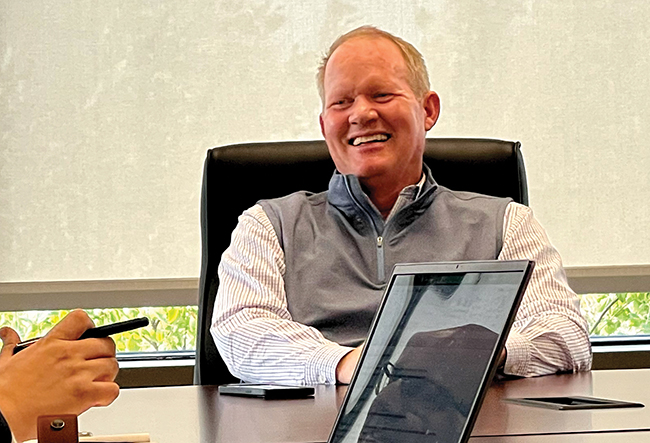 When David Hall was a student at the University of Michigan and a member of the golf team, he briefly considered trying to make a living at the game.

But a guy named Phil Mickelson – “You may have heard of him,” Hall says now with a laugh – helped convince the future mortgage magnate that the business world was probably a better option.

“I’d see him at tournaments and he’d be beating me by strokes,” said Hall, able to chuckle about it now. “I figured there was something better I could do to make a living than trying to beat this guy.”

Turns out he was right.

When Hall left school, he took an entry-level job with Rock Financial in 1995. Twenty years later, he started his own mortgage company, Hall Financial, in 2016. As the founder and CEO, he has seen Hall Financial grow by 100% every year.

Along the way, he has crafted an effective system for building a team that doesn’t necessarily depend on the subject expertise candidates might possess, but instead relies on more cultural aspects of a candidate’s personality – attitude, coachability, work ethic – to get the right fit.

Hall and his team rely on what they call the “Big Four” traits when considering candidates:

One of the skills necessary to be  good team builder, Hall said, is an ability to “identify and size people up pretty quickly in terms of whether they’re a team player.”

“I never hire for the position or the resume, never,” said Hall, who grew up in the Detroit area and graduated from Grosse Pointe South High School. “I’ve been criticized for that, but it doesn’t matter. I just have a real philosophy that I hire for the person. I believe the person with the right foundation can learn the job.

“I’ve worked with bosses who like to hire the subject matter expert and I’ve worked for bosses that wanted to hire the person who was going to be the best culturally in terms of attitude and their outlook on life,” he added. “It’s my belief that the person who brings a great attitude and effort and a lot of energy is just, to me, not only more fun to work with but also typically more productive.”

Hall, marking more than 25 years in the mortgage business this year, offered his thoughts on business, on team building and other issues:

Corp! Magazine: Is this what you’ve always wanted to do?

David Hall: I just kind of fell into it, to be honest. My first job I made $8 an hour as an assistant and worked my way up to being a leader in the company. It was an entry level job that got me started doing something, and I got decent at it enough that I could thrive.

I spent 13 years at Rock Financial/Quicken, then I went and spent five years at United Wholesale Mortgage. By 2015 I figured I’d about seen it all with the two most successful guys (Dan Gilbert and Matt Ishbia) who I worked directly with for 20 years. I figured I was ready to do my own thing. If I wasn’t ready then, I was never going to be ready. I really wanted to own my own business, and 20 years of having bosses led me to think the time was right.

Corp!: So how do you go about building a successful team?

When I think about hiring someone who maybe doesn’t know how to do the position exactly, that doesn’t mean you can’t teach it to them and they can’t train themselves up. They can become a better version of that person in the long run because of these foundational things they have in terms of attitude, effort, outlook, hard work, all those kind of things.

If I can find someone who’s really good at what they already do and they hit our “Big Four,” that’s a home run situation. If they hit the Big Four and I have a different job than they’re used to and they’re up for the challenge, that’s really exciting and invigorating for a lot of people. There are a lot of advantages to learning a new skill.

Corp!: Talk about the “Big Four.” Why does it work?

Hall: Our whole team has really come up with this, and it’s something we’ve shaped over the last couple of years. What are the most important characteristics of people we’re looking to add to our team? We thought attitude, hard work, coachability and liking being on a team are the most important things for us to continue to grow our company.

I’ve always found – and this dates back to my days playing sports – you could always find reasons to not like somebody on your team. It’s really hard to find something you like about everybody. If there’s someone on the team that’s annoying to you or you don’t see the value in them to the team … it takes a real effort to figure out, why is this person important to the team? What do they contribute that I don’t? That’s sort of next-level thinking that I try to encourage among all our people.

We talk a lot about the right mindset to become successful. I’m a big believer in that. When I was in school, I studied a lot of sports psychology … it really helped me with my golf, and I just understand the power of how you think as to how you perform. We make that an organizational focus.

Corp!: But how can you tell all of that just in an interview?

Hall: When we interview people, we’re very open about saying, ‘Look, you’re interviewing us and we’re interviewing you.” We want you to feel really comfortable. We want them to know what they’re getting into. You’re getting into an environment with a lot of other people who work really hard. If you’re not a hard worker – of course, you can tell me you are in the interview – it’s going to show up when you get here.

Corp!: How would your “Big Four” translate to other industries?

Hall: I think that having a philosophy of what you’re looking for is important. I think if I was in other industries for 20 years maybe I’d look at it different. One of my strengths is, when I’m in a certain environment (the mortgage business) I’ve figured out how that is successful. I can’t say it translates to every industry, but I would say that philosophically knowing what you’re trying to bring on is really important.

Corp!: Has the pandemic changed how you go about it?

Hall: It hasn’t changed it, but the pandemic really revealed how resourceful – and I think that comes from being hard workers – our team is. We’ve been extremely fortunate to have great results and we worked from home for almost a year. We didn’t miss a beat, and we made sure all our people had what they needed to succeed.

Hall: I think our first year or two we really learned a lot. I would not say our first two years were very successful, to be honest about it. When you start at nothing, it’s not hard to grow 100%. You’re just starting to figure it out. It was very frustrating for me. But after Year Two, we started figuring out the importance of lots of communication, being on the same page. We create a standard that’s really high, and we want to hit it.

The standard of excellence at our company is really high and we’ve developed that over time, so much so that people aren’t used to that when they start, and I worry a little bit.

Corp!: You told us a story about something you told your team at a recent company outing.

Hall: I told our team I feel like we’re in the top of the second inning with what we’re doing with this company, meaning we’ve got so much more we can do. I’m into big, big goals. I don’t want to just do some mortgages and make some money. I want to make the experience better, I want to really make an impact. This is the last stop in my career, and I want to make Hall Financial stand for something that’s significantly different.”