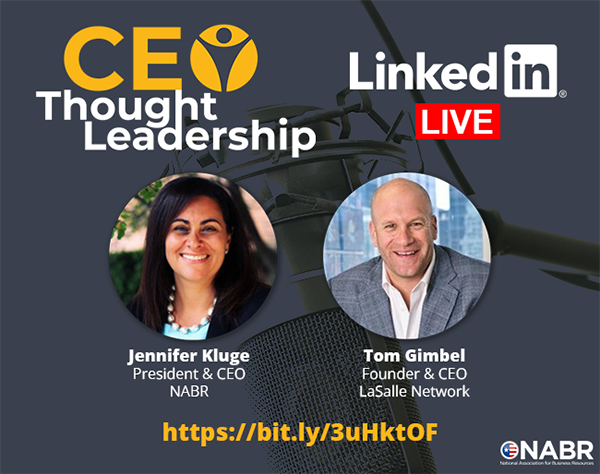 Tom Gimbel knows a CEO is only as good as the team that surrounds him.

And Gimbel should know. He’s spent more than 20 years building his own team and helping other companies build theirs.

As the founder and CEO of the LaSalle Network, a Chicago-based recruiting and staffing firm, Gimbel has built a team of some 300 members, including more than 200 recruiters, since founding LaSalle in 1998.

“If you don’t have great people, having the best ideas doesn’t matter,” said Gimbel, whose firm is a Best and Brightest Companies to Work For winner on both the Chicago and national levels. “I’m very fortunate to have a great team, and we work really well together.”

Gimbel shared that perspective, and many others, during the first episode of “CEO Thought Leadership Series on LinkedIn Live.” The new discussion series, hosted by the National Association of Business Resources, debuted Wednesday.

“CEOs face a number of challenges, particularly around recruiting and retention,” Kluge said. “With our CEO Thought Leadership series, we hope to bring attention to and start a discussion about those challenges.”

LaSalle Network’s recruiting and staffing professionals primarily recruit for white-collar companies, with both a permanent search group and temporary and contract businesses.

“We have about nine different verticals that we do,” Gimbel said. “The things we don’t do we introduce clients to experts in those areas and try to be a conduit to help everybody.”

On the initial program, Gimbel talked about what it takes to build and keep a solid team to ensure business success. One of the keys, he said, is having a funnel of talent available from which to hire.

Gimbel recommends continually interviewing people “for positions that report to you.” How often a CEO conducts such interviews – two a month, one  week, five a quarter – is up to the CEO. Having such a funnel, Gimbel said, helps measure “what you’ve got versus what’s available.”

The recruiting process isn’t limited to just potential new hires, according to Gimbel. CEOs also should be doing what he calls “stay interviews,” spending time with employees to find out how they’re doing, whether they’re being challenged sufficiently in their position and what they’d like to accomplish.

“I believe if you do that you’ll eliminate turnover by 70 to 80 percent because people will feel you’re invested in them,” Gimbel said. “It’s an emotional connection in the workplace. People like to be around people who care about them.”

But the top priority for CEOs, according to Gimbel, is being ready with a plan if the company’s best employee leaves. Every person who runs a team, whether an executive or middle manager, needs to be able to answer that question.

“We live in a world where the divorce rate is 50%,” Gimbel said. “To think that people in a corporation might not leave is crazy. You might not like it, but you’ve got to be prepared for your best person to leave and know how you’d regroup.”

Turnover is especially likely in this day and age, especially in the industries for which LaSalle Network recruits, which Kluge and Gimbel agreed are “high-burnout” businesses.

“They’re not leaving to go stay at home … You’ve got some people who may have re-entered the workforce right before COVID, and then you go through all this stuff with child care and things, and they choose not to stay,” he said.

“But there aren’t a ton of people who are (saying), ‘Hey, I’m going to go live on a beach for six months,’” he added “It’s just not that way. I don’t know anybody who’s doing that. The majority of people are looking for jobs that will pay more, that are in an industry they’d rather be in, a job that’ll be more challenging.”

Many of those leaving are women, Gimbel says, who are leaving hospitality and service industry jobs, often to focus on family issues.

“You have people who were going in and being servers and now they said, ‘I can’t do that because my kids might get called out of school because of a COVID scare,’ Gimbel said. “Is that ‘the great resignation’ or is that saying, ‘I have to be there to take care of my kids.’ That’s unfortunate because women are so productive in the work force.”

For those staying in or returning to the work force, the structure of jobs is changing since the beginning of the pandemic. Companies who largely moved to a remote work model during the pandemic are now having to decide whether to keep that model or modify it to suit current needs and conditions.

And while there will always be businesses like law firms or banks who require employees to come into the office, Gimbel believes a hybrid of the two models will likely be something that sticks around.

“I think ‘remote Friday’ is the new ‘casual Friday,’” he said. “I think you’ll have a real interesting flex on paid time off and vacation because people can now say, ‘I’m going to go away for a long weekend, but I’m also going to go two days earlier because the flights are cheaper and I can work remotely for two days.”

Gimbel thinks either a Tuesday-through-Thursday schedule – or perhaps Monday-Thursday, with Monday being  flex day – will become commonplace, particularly if the unemployment rate stays low (it was 3.6% last month) and companies have to make their employees happy.

“When unemployment rises, the stock market dips, and interest rates go up, you’re going to see a different world. When jobs are scarcer and harder to find, when salaries come down, the employees don’t have as much say. Right now (employees) can say, ‘I want to work from home on Mondays,’ and companies will say OK. But in a different economy, (employers) are going to say, “Not so much. We want you to come in.’”