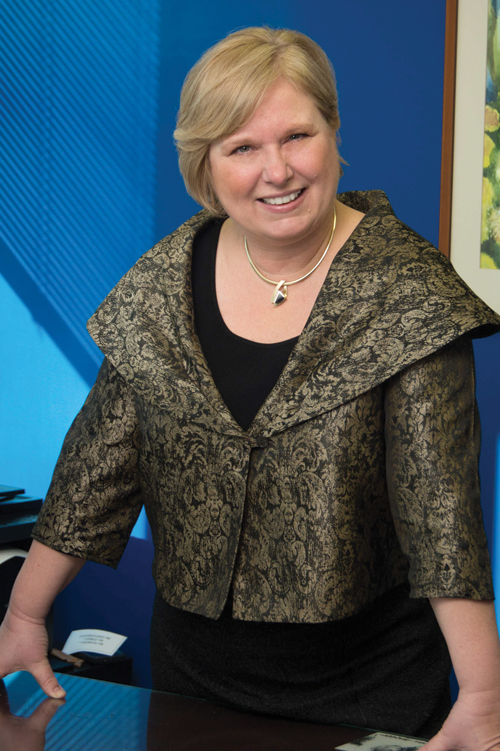 The turning point for Lynn Drake’s career in commercial real estate came one day when she was working for what she calls a “traditional” brokerage house and had shown a potential tenant a possible space in one of the buildings her employer was trying to lease.

“I was told that I needed to ‘push’ that tenant to take the space,” says Drake.

Regardless of the real or potential conflict of interest, Michigan law is very clear on “who wins” should the rights of a tenant and a landlord clash when it comes to real estate representation.

“If you’re representing a landlord, their rights go over that of the tenant,” says Drake.

Today Drake has no such problems, the key reason being her ownership of Compass Commercial, a real estate firm that represents tenants and buyers exclusively, not the landlord.

Launched in 2010, Compass has clearly set its own course in the Michigan commercial real estate market, having more recently gained the kind of stature only a business owner who’s been to the bank can truly appreciate.

“About a year and a half ago, I was at the bank, opening a personal account, when I was essentially offered a line of credit. And at that point, I wasn’t even asking.”

Drake has plans to begin building her company to at least five offices and has a goal of growing the business “substantially” within just a few years. Drake and Compass in June won the overall Entrepreneurs of Distinction award from Corp! magazine.

Beating back barriers
But the story of how Drake got to where she is today is at least as interesting as the work she and a small staff do to help their tenant-only clients survive while swimming in waters teeming with landlords.

It begins, as many good stories do, with difficulty being overcome.

Drake had struggled with dyslexia, failed first grade and then was  “pushed forward” in school.

It would get worse.

Drake says it took her fifth-grade teacher calling her “retarded” to get her parents to pull her out of the district.

She then began school in Troy, where Drake says there was a much better program, including in high school, where the early effects of the dyslexia were reversed.

“I became a regular teenager,” she recalls. Enrolling in Oakland University, Drake earned a bachelor’s degree with a concentration in accounting, graduating in 1982.

And took a job as an accountant.

“I was bored stiff,” says Drake. “I realized I just could not do this for the rest of my life.”

What Drake could do was real estate, having quite literally grown up in the business, her mother being an investor in property.

In 1987, when she saw a newspaper advertisement for a real estate assistant to Matty Moroun, owner of the Ambassador Bridge, she jumped at the chance.

“It was an exciting place to start a career,” she says. “You got to do everything, including most things people in the real estate field would never have the opportunity to touch.”

Five years later, in 1992, Drake joined Ameritech, where she was responsible for a business that was quite literally in its infancy.

“I was responsible for the acquisition and zoning of cell towers,” she says, recalling a day when communities weren’t required by law to find places for the towers (like they are today).

“One of my favorite stories was when one of our engineers said she wanted a tower placed ‘right there’—and pointed to a location where the giant sign for Schoolcraft College on I-275 is today. I did it, working with the community and made it happen.”

But Drake found herself in an awkward position, with cellular phone providers losing funding for cell-tower growth and laying her off, pretty much predictably every year.

It wasn’t, however, a problem that was exclusively Ameritech’s.

When Drake moved to Boston, she found a similar pattern there and by 1996 she had decided to move back home, landing a job at Kelly Services as its manager of real estate.

In the next four years, Drake would have the opportunity to reorganize a department responsible for thousands of offices, a job she says took about 18 months to complete.

“I never felt quite right in the corporate setting,” says Drake, who found herself on an Outward Bound leadership adventure, climbing a 15,000-foot mountain in Montana with people 15 years younger. “They were sprinting up the mountain. I was slower, but I did it.”

She also came to the conclusion that it was time to leave Kelly, prompted at least a bit with the results of a test designed for people who wanted to understand their career strengths.

“I scored so high in the sales area that the people who were administering the test wanted to hire me,” says Drake.

She didn’t take the bait but did join a real estate brokerage that was purported to be “woman friendly.”

“It was a huge mistake,” Drake recalls. “Within a month I knew it was the wrong move but it took me nine months to leave.”

That point came after Drake made the mistake of attending a sales meeting and standing up to a company vice president who had told her she’d never make it in the business.

When Drake went to a function held by another firm a few days later, word had spread of her dismissal (and the circumstances behind it).

“I had a job offer from every major brokerage house within two weeks.”

Ultimately, Drake joined a “tenants only” real estate firm where she could stay true to her values and make some money at the same time. It was where she also learned how to cold call.

“Some people say cold calling is dead, but it’s not,” says Drake.

One of her early contacts was the Leukemia and Lymphoma Society, based in White Plains, N.Y.

“There was a series of calls and returned calls, but I never ended up speaking to anyone,” says Drake. “I did, however, get an invitation to pitch the account and won the business. Over the next five or six years, we saved them $13 million in rent at about 100 offices throughout the country.”

Forming Compass
The relationship was so powerful that when Drake ultimately left to form Compass Commercial, she was able to take that client with her.

But for Drake, leaving the place she knew as her corporate home wasn’t as easy as some people might think.

“It actually took about a year,” she says of the decision to pull the plug.

It was also around the time of Lynn Drake’s 50th birthday.

Examples of items on her list included riding a camel, riding an elephant, and renting a three-seat plane and having the pilot let her take the controls (albeit briefly).

By then it was time to get back to work and the launch what became Compass Commercial. That process, picking a name, was a bit of a process in itself.

“I knew it wasn’t going to be about Lynn Drake,” she says. “It was about building a brand. The problem was a lot of the names you think about were gone.”

Compass, the name having come from Drake seeing an article in Oprah’s magazine with a picture of a compass, was at first set up in her Troy home and staffed with a part-time college student and a full-time assistant.

With no ability to borrow money for the inevitable start-up costs, Drake took $10,000 of her own money, borrowed another $10,000 from her sister and tapped into CEED, the Michigan branch of the Center for Empowerment and Economic Development, where she was able to borrow $20,000.

She also learned a good deal about what it would take to run a business like Compass Commercial.

Drake subsequently made another decision that she says has made a positive difference, joining ITRA Global, an alliance of real estate firms that only represent tenants and buyers.

“I needed a platform that I could work with across the country,” says Drake of the ITRA connection. “It’s been huge for me.”

What is also huge is the value she brings to her clientele.

“The rent is important but there are often things in a lease that can cost more than the rent,” Drake notes. “And at renewal time, we bring competition to the process, soliciting offers from other landlords that can be the basis for a better deal than the tenant would otherwise get if they simply signed for another term.”

Even with having taken a while to get to the point where she is with Compass Commercial, Drake says she is living a life without regret.

“Both my parents owned their own business. Being an entrepreneur is what I would call my ‘natural person,’” she adds.

And if she hadn’t spent the time in the various firms she ended up leaving, who knows what would have happened?

“I certainly wouldn’t have had the knowledge that I have today, the knowledge that’s helping my clients succeed. They are places where I learned to be a broker and I needed to have those steps to be what I am today.”