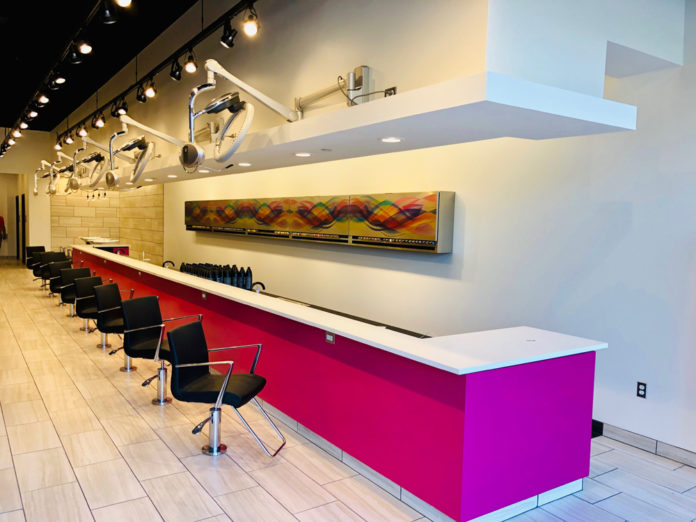 The future of hair care – and likely an upcoming sign of the times for many other industries – is in what are known as single-service stores where people can receive help with cut, color, nails and more, faster and easier than ever before.

A prime example of this trend is the growth of dynfly, a single-service, hair-coloring concept developed in Michigan. Created in 2014, dynfly has grown from its first two locations to become a franchise in 2018 – and it already has big plans for the future.

The first franchise location recently opened in Shelby Township, and owners say they have sold 10 more as part of its super-charged expansion plan. Two of these locations in Rochester and Livonia will open later this fall.

Expert team
“With an estimated 75% of women coloring their hair in a salon or at home, dynfly’s concept and franchise opportunity immediately appealed to us based on its proven track record and the expert team behind the brand,” James Mallo, one of the franchise owners, said.

Dynfly is the brainchild of hair designer and salon industry veteran George Nikollaj, co-owner of 6 Salon in Birmingham and Royal Oak. The idea, Nikollaj said, was inspired by the huge surge in popularity and success of blow-dry bars, a single-service concept that has developed into a $150 million annual business.

Nikollaj said he wanted to take that same idea and thought hair coloring would be a good fit. It takes some customer education to get them on board, but once they see the time-saving opportunities of going to a hair-coloring shop, they embrace the concept, he said.

As Nikollaj explored expansion opportunities, he brought on franchise expert Cliff Lunney, president of Bloomfield Hills-based CWL Investments, as a partner. Together, they developed the dynfly brand, salon and franchise model.

Color bar
The 1,600-square-foot Shelby Township dynfly color bar employs 15 fully licensed and professionally trained colorists. Nikollaj said he wanted to create a space where people can come in, get their hair done quickly and get back to their day. As a result, dynfly is ideal for in-between touch-ups and full color treatments.

The salon is simple with all white fixtures and a long bar area for the customers. The decorations are spare. The idea is to keep it clean and sophisticated so people feel like it’s both upscale and elegant, Nikollaj said.

Here’s how it works: You arrive at the dynfly shop and take a seat at its “bar” area. Your colorist finds out how you want your hair and creates a profile for your color and preferences. Your color is mixed right in front of you and then applied. The customer can leave with their hair wet or use the YDI (or You Do It) finishing bar to dry and style their hair. Customers are in and out of the shop in 60 minutes or less. Services cost around $35 for a color and you can set up a regular schedule to get discounts on the prices as well.

Nikollaj says he sees a day in the not-so-distant future where salons will be on the low end, like the inexpensive hair cut shops, to high-end ones like his. All competition in the middle will be eliminated in part by these single-concept stores as well as the way consumers want to shop today. Single-concept stores like Lash, Drybar and, hopefully, dynfly will replace these middle salons.

“(Industry surveys show) 60 percent of people color their hair; under 50 percent do it themselves,” Nikollaj said. “We know we’ll never get that 50 percent that are doing it themselves into our (high-end) salon. But we think they’ll go to a single-concept shop like dynfly. The rest will go because it offers savings on time and money.

“We are a pop in, pop out salon. We are all about your convenience,” Nikollaj said.