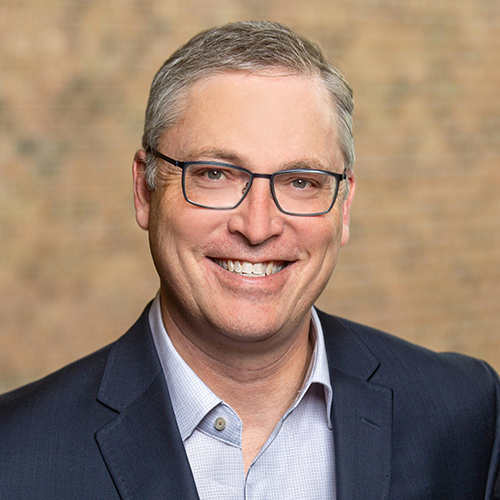 Back in high school, Randy Thelen studied banking and paid attention to what was happening with The Fed. His dream job? Chairman of The Federal Reserve.

In pursuit of that dream Thelen, then an undergrad student at Alma College, once traveled to Chicago and stood outside the Federal Reserve Board office there, handing out resumes to employees arriving for work.

It didn’t get him anywhere, as no one contacted him – “I think there was a flaw in my plan,” he says now with a chuckle – but the lack of response hasn’t stopped him.

“This is a tremendous opportunity,” said Thelen, who earned a bachelor’s degree in economics from Alma and a master’s in applied economics from Binghamton University in New York. “The organization has 35+ years of successful history and that gives us a great foundation to build on, to keep stretching and keep going forward. I’m looking forward to that.”

Thelen replaces longtime president and CEO Birgit Klohs, who left after 35 years at the helm, during which The Right Place helped to create or retain 47,000 jobs and spur over $5.1 billion in new regional investment.

A big challenge
He’s looking forward to the challenge of moving The Right Place forward toward even bigger success.

“When you walk into a job like this – maybe run into a job like this – you’ve got to quickly get out and meet with key stakeholders and start to understand what their dynamic is, how that relates to our strategy,” Thelen said. “This is a team sport, and we’ve got to get more and more people involved in economic development. That’s what I’m out to do.”

Thelen comes to The Right Place after serving as Senior Vice President of Economic Development at the Downtown Denver Partnership. While in Denver, Thelen led efforts to attract investment, recruit and retain business, and advocate for housing, retail, and public policy initiatives. He supported downtown projects totaling more than $1 billion in investments.

Glimpse of the future?
Before that he led the Greater Omaha (Neb.) Economic Development Partnership, a two-state, eight-county regional economic development effort. Thelen executed a $24 million Prosper Omaha strategy which brought $3.9 billion in new capital investment and 13,000 new jobs to the area.

Thelen believes those experiences gave him some insight into what West Michigan could become.

“Both markets, frankly, are a bit bigger than Grand Rapids, so I almost had a look into what might be ahead for West Michigan,” Thelen said. “Denver right now is one of the top five growth markets in the country. They’ve done tremendous work.”

The lesson for Thelen now that he’s back in West Michigan, he said, is that both Denver and Omaha “invested in themselves in a meaningful way.”

In Denver, “Imagine a great city” is a tagline that gets used a lot.

“If you look back at the history of Denver it has not always been that great city that it is today,” Thelen said. “You go back throughout history and it was very much a boom-and-bust – and more bust than boom – kind of market.

The result, according to Thelen: A road map for attracting, developing and retaining the top talent.

The Right Place leadership team believes all of that experience will pay off as Thelen settles in.

“Randy will help us write the next chapter for The Right Place and West Michigan,” said Sean Welsh, TRP’s board chair and regional president, Western Michigan for PNC Bank. “Continuing to tell our story to business leaders and job providers around the world is so important in a very competitive market. I’m confident (Thelen) is the right person to continue building our significant accomplishments.”

For Thelen, it’s a homecoming of sorts. He grew up in the area, and his career began at economic development organizations in Evart and Monroe, Mich., before he moved to the Michigan Economic Development Corporation.

He was the first president of Lakeshore Advantage, where he led attraction of $1.2 billion in investments and 8,000 jobs during his 10-year tenure.

With that much experience here, Thelen understands the draw of both Michigan, a state he calls “asset-rich,” and the western part of the state in particular.

The area has a strong educational infrastructure he says “sets us apart,” with “great institutions” in the automotive, office furniture, food processing and aerospace industries.

“Certainly we have this rich history in Michigan of being able to make things,” Thelen said. “But behind the curtain are all the people who dream up and design and engineer things. In a world that’s looking for more connections … I think we have that design and engineering prowess that can advance us to what’s next. I think that separates us.

Quality of life
“West Michigan, in particular, has long been recognized as having an extraordinary work ethic, an extraordinary business community, a very collaborative culture,” he added. “Those are all terrific strengths for business to walk into knowing there’s going to be a strong business climate for them to engage.”

Thelen also brags on quality-of-life amenities as reasons West Michigan is such a draw.

“In the last 20 years in particular, West Michigan has really stepped up its game in terms of quality of life attributes we offer people in terms of redevelopment of downtowns throughout west Michigan,” he said. “Certainly Grand Rapids has made extraordinary strides in 20 years.  But you look around the region, in Holland, Muskegon now is doing tremendous work on their waterfront, Lowell, Hastings, Newaygo … you can look all over the region and find just great quality of life options.”

So Thelen steps into the rather large shoes of Birgit Klohs, and vows to continue – and hopefully improve on – her success. Others expect the same thing.

“Birgit’s legacy can be seen in the economic vitality of this region. Especially now, as this worldwide pandemic highlights our need to be creative, bold and to plan for the future, the foundation The Right Place has built over the past 35 years puts us on very solid ground,” said Tina Freese Decker, The Right Place board treasurer and president/CEO of Spectrum Health. “We’re confident that Randy will continue moving us toward an even more successful future.”

For Thelen, though, the chance to come back to an area he considers home is a “powerful” draw.

“That’s where the job really starts to have deep, deep meaning is when I can do this kind of job and make an impact in a community I consider home,” he said. “That was a big, big pull. Years ago when I worked along the lakeshore, the job always has, for everyone, deep meaning because you can truly impact the trajectory of people’s lives through providing job opportunities or income opportunities and therefore increase the quality of life for individuals.

“When you can make that impact in a market that’s home, that’s where it has the most meaning and most satisfaction.”