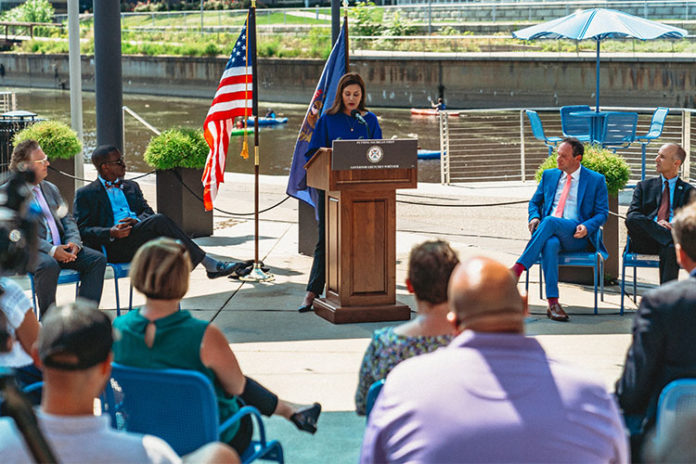 Whitmer laid out details of the plan at a Lansing press conference. As Michigan’s economic jumpstart continues, Whitmer says her proposals will tackle underlying issues faced by families, communities, and small businesses and take advantage of the historic influx in federal resources to deliver meaningful change that makes a real difference in people’s lives.

“Since day one, I have been laser-focused on putting Michiganders first and tackling kitchen-table issues with real, tangible solutions,” Whitmer said. “As we emerge from the once-in-a-century pandemic, we have a once-in-a-generation opportunity to use billions in federal resources to grow Michigan’s middle class, support small businesses, and invest in our communities. With the $2.1 billion in proposals I have laid out, we can raise wages, give people paths to high-skill jobs, grow start-ups, build clean energy infrastructure, and do so much more. I’m utilizing every resource and ensuring that we continue to take bold action to help families, communities and small businesses thrive. Together, we can usher in new era of prosperity for Michigan.”

Michigan’s economic jumpstart is underway. The state had the fastest-growing economy in the Midwest over the first three months of this year, a lower unemployment rate than the national average, a $3.5 billion surplus up from a projected $3 billion deficit, and two boosted credit rating outlooks, according to Whitmer.

Michigan’s manufacturing industry leads the country in automotive manufacturing and appears near the tops of several lists on job creation, business climate, and foreign direct investment.

But, the governor and other business leaders at the presser pointed out, the state also faces several economic challenges too. There are too many jobs that do not pay enough, not enough workers to fill open jobs, not enough workers with the skills necessary to fill high-skill jobs, a lagging entrepreneurial sector, and a lack of affordable, attainable housing.

Whitmer said her proposals address these challenges under three key pillars: $722 million to grow the middle class and educate more workers, $651 million to support small businesses and create better jobs, and $800 million to build housing and invest in communities. There are several proposals under each of these three pillars.

To grow the middle class and educate workers, Whitmer called for a $215 million expansion of Michigan Reconnect and Future for Frontliners, a $70 million investment for growing the pipeline of talented workers to industry, a $100 million influx for the Going Pro credential program, and further investments in programs that offer work experience to Michiganders earning their GEDs and help those reentering society after incarceration transition into the workforce.

To support small businesses and create better jobs, the Governor is building on her $300 million Michigan Mainstreet Initiative, which offers grants to restaurants, place-based businesses, and microenterprises with further dollars to attract more start-ups. She outlined a $200 million investment to create a more conducive business environment for high-tech, high-growth start-ups and create jobs of the future in Michigan. The Governor put forward $40 million to speed up electric vehicle charging infrastructure and $100 million to prepare manufacturers and the workforce for opportunities of the future. Finally, she proposed an $11 million investment into the STEM Forward program, which places STEM students in internships in Michigan and improves talent attraction and retention.

Whitmer said her economic announcement will build on the Michigan’s Economic Jumpstart Plan she unveiled in June. The plan would invest in working people and small businesses in Michigan by increasing incentives to boost wages and attract applicants, provide grants to small businesses to ramp up hiring, and expand access to childcare for families with young children who want to return to work but cannot. Together, today’s proposal and the jumpstart plan will help Michigan’s families, communities, and small businesses thrive.

Lansing Mayor Andy Schorr pointed out that local businesses and economic development contribute to the growth of a city.

“It’s vital that we continue to support and invest directly into communities like Lansing,” Schorr said. “I am proud to stand by Governor Whitmer’s side to support her proposal to use federal funds to help small businesses and families – the lifeblood of thriving communities.”

John Walsh, president and CEO of the Michigan Manufacturers Association, said he “looks forward” to working with the administration as they finalize their recommendations. “We’re thankful for the governor’s willingness to address the biggest challenge facing our Michigan manufacturers, that being a large and talented workforce,” Walsh said. “The proposed investments in training and education will create opportunities for our citizens and growth in manufacturing.”