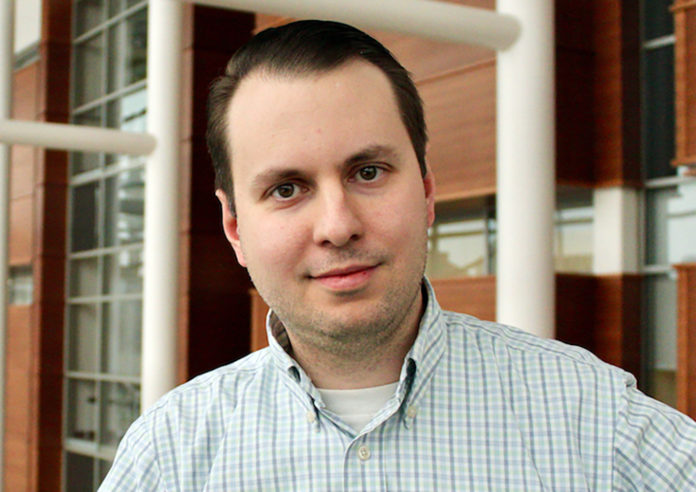 DETROIT – The U.S. Department of Energy announced $73 million in funding to advance quantum information science research to aid in better understanding the physical world and harness nature to benefit people and society.

Aaron Rury, Ph.D., assistant professor of chemistry in Wayne State’s College of Liberal Arts and Science, is the recipient of one of 29 projects funded by the DOE.

Rury’s $3.3 million award — in collaboration with researchers at the University of California-Irvine, the University of California-San Diego, Los Alamos National Laboratory, and Argonne National Laboratory — “Multi-component Cavity Polaritions for Tunable Intermolecular Entanglement and Controlled Photo-to-Electron Quantum Transduction,” will aim to understand how the entanglement of quantum excitations appears and evolves temporally in complex chemical systems.

While we all live in a chemical world, the many-body interactions that dominate the behavior of molecules at room temperature have stymied researchers’ ability to use them in emerging quantum technologies.

According to Rury, these fundamental scientific challenges inhibit the use of molecules in QIS applications and impede the use of quantum information in the design of chemical processes in the condensed phase.

“To aid in overcoming these challenges, our team will theoretically and experimentally study multicomponent entanglement driven by the strong coupling of room-temperature molecules to the photons of nano- and microscale electromagnetic resonators,” said Rury. “Researchers on our team will formally define entanglement in the presence of many-body, interacting sub-systems, connect these definitions to spectroscopic observables in model physical systems, measure how entanglement evolves on ultrafast time scales experimentally, and correlate polariton-mediated intermolecular entanglement with changes to the dynamics of photo-excited molecules.”

The team will use formal models that describe the material and photonic contributions to hybridized light-matter states, known as cavity polaritons, to build an intellectual bridge capable of describing the evolution and coherent manipulation of multipartite entanglement between multiple molecules or cavity photons in both the optical and mid-infrared regions of the electromagnetic spectrum. This bridge will create new fundamental scientific knowledge of how entanglement appears and evolves in chemical systems and will show how the math, theoretical physics, physical chemistry and synthetic research communities can work coherently to solve real-world problems that currently limit the impact of quantum technologies on society.

“It is our hope that we will create new research avenues into the temporal manipulation of entanglement for quantum information processing protocols at THz bit rates,” said Rury. “In addition, we hope to create fundamental quantum mechanical methods to control molecular photophysical properties at room temperature deterministically. This major award from the DOE is critical to these important research goals.”