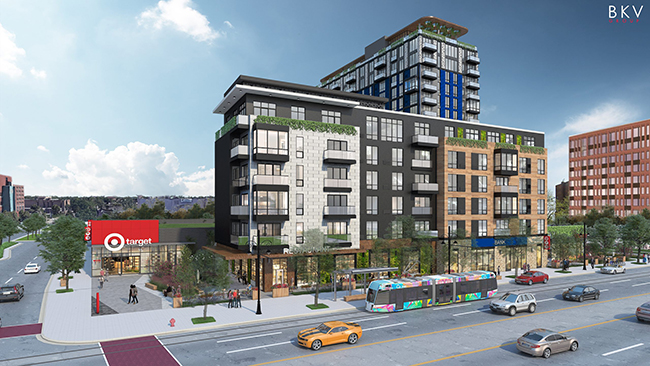 Target is coming to Detroit.

“I would like to thank Target for choosing Detroit, Midtown and our next new mixed-use apartment hotel community in the city,” Holtzman said.  “This important announcement is a testament to Detroit’s strong leadership and continued momentum. It has been a major and coordinated effort to secure approvals on our initial plans from the planning and zoning departments, attract Target as an anchor tenant and complete our agreement with the landowner.

“The next stage of the development process is to develop and receive approval for a complete set of architectural plans and specs,” Holtzman added. “This development requires continued collaboration on many additional critical components.

The development is a mixed-use residential and retail development, and Holtzman said City Club Apartments is interviewing companies “with the depth, experience and expertise commensurate with the development.”

“We continue to be in an environment with significant labor and material shortages,” he said.

The new 32,000-square-foot store will be located at the southeast corner of Mack Avenue and Woodward Avenue and follow the format of similar sized stores around the country.

Duggan said the announcement made Momday “a great day.”

“Over the past decade we have seen Midtown develop into a vibrant, diverse, mixed-income neighborhood,” Duggan said. “Adding this Target store will provide an anchor retail presence to serve residents in the area and across the city.”

Mosey said Midtown Detroit, Inc. is “thrilled that Target is coming to Midtown.”

“This store will offer grocery, general merchandise and other amenities for our growing downtown/Midtown population of over 25,000 residents and 30,000 college students,” she said. “We anticipate residents from other Detroit neighborhoods will also find this store a convenient shopping option.”

Located on 2.4 acres at the southeast corner of Mack and Woodward avenues, City Club Apartments Midtown will include 350 apartment and penthouse apartments in three distinctly designed and cohesively connected buildings with 186 underground parking spaces.  Twenty percent of the apartments will be affordable at 80% AMI.  The street level retail space will include the Target store, an international bank branch and a restaurant and café with dedicated outdoor seating.

Earlier this year, City Club Apartments completed the total redevelopment of the 18-story 202 apartment and penthouse City Club Apartments Lafayette Park including the addition of a large outdoor park with a heated pool and hot tub, Zen garden, bark park, beach volleyball court, grilling area and custom lounge seating and cabanas.
No dates for either the ground-breaking or the opening date for the complex were released.