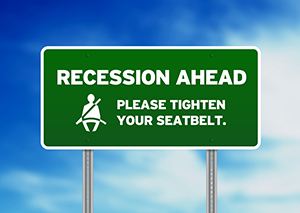 The first hard economic data for July came in much better than expected. The U.S. added a huge 528,000 nonfarm payroll jobs in the month, more than twice the consensus forecast, and the unemployment rate edged down to 3.5%, matching the half-century low reached before the pandemic. Inflation was cooler than expected, too, with the CPI unchanged on the month as falling prices of gas and other energy products offset increases in most other parts of the price basket. Core CPI excluding food and energy also rose less than expected, up 0.3% on the month. Consumers are getting more relief in early August as national gas prices pull back to $4.00 per gallon. While real GDP contracted slightly in the first half of the year, the economy also averaged 471,000 nonfarm jobs added per month through July. Job growth like that just doesn’t happen during a recession.

However, some of the most reliable leading indicators of the business cycle are pointing to deeper trouble ahead. The differential between 2-year and 10-year Treasury yields, the Conference Board’s Leading Economic Index, small business sales expectations, and unemployment insurance claims are flashing red to an extent rarely seen other than before or during a recession. These core economic forecasting tools now say a recession—falling employment, output, sales, and incomes that affect a broad swathe of the economy and last more than a few months—is more likely than not.

This forecast lays out a plausible path to recession. The housing, tech, and big box retail sectors are cooling in the second half of 2022. High prices of gas, food, utilities, and rents are stressing household budgets. And overseas, futures markets for British natural gas and German electricity show heating costs are set to surge again this winter as Russia weaponizes natural gas. Another tough heating season would hit American consumers harder than last year’s, since many households have depleted the financial buffers they built up during the pandemic. With consumers likely to curtail discretionary spending, nonfarm employment would fall from November to April, and the unemployment rate rise by about three-quarters of a percent. A recovery is likely to begin in the spring as utility prices normalize.

A recession is not a done deal, and its easy to imagine ways the economy could outperform this baseline. The recent drop in gas prices is  great news for household finances, and the further it goes, the better it gets. Job growth has consistently outperformed expectations in the year to date, and could hold up given that labor demand remains extremely high. And the stock market is up more than 10% from its June low, a sign that some investors think that the worst is behind us. A muddle-through expansion is still possible. But it has higher obstacles to overcome than seemed the case earlier this year.