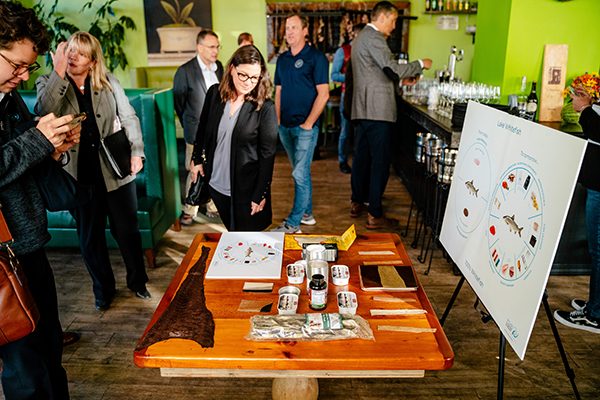 DETROIT — The Conference of Great Lakes St. Lawrence Governors & Premiers, a Chicago-based organization representing the Governors of the Great Lakes States and the Canadian Premiers of Ontario and Québec, today launched its “100% Whitefish” initiative that includes a diverse group of partner organizations. Dan Eichinger, Director of the Michigan Department of Natural Resources, helped kick off the initiative in conjunction with a “head to tail” whitefish tasting organized by noted Detroit-area executive chef Doug Hewitt, in collaboration with Motor City Seafood Company. The event also featured remarks from Dr. Thor Sigfusson, Founder and Chairman of the Iceland Ocean Cluster.

The organization’s goal with the campaign is to demonstrate how 100% of a whitefish can be used for different purposes and beyond just food. The effort builds on success with the cod in Iceland and with other species elsewhere globally. Organizers believe that a 100% fish strategy holds tremendous promise for the Great Lakes St. Lawrence region to more completely utilize caught fish, drive greater economic returns, create jobs and help develop rural economies.

Director Dan Eichinger said, “The 100% whitefish initiative can help bring new products, jobs and revenue opportunities to our local communities. It also represents a more sustainable use of one of Michigan’s iconic natural resources—lake whitefish—while growing our blue economy in a way that can maximize the commercial return while respecting the management, health and recreational needs of the fishery.”

Dr. Thor Sigfusson added, “Iceland has proven the 100% fish concept and we are now creating similar successes around the world. Initial testing on lake whitefish has shown many different high-value products that could be made from materials that are today either thrown away or processed for very low value. Great Lakes whitefish can be our next success story.”

Current uses for commercially caught whitefish only capture a small fraction of the full potential value of each fish. Overall, the Great Lakes commercial fishery is a tremendously undervalued and underutilized asset. Iceland pioneered the “100% fish” strategy that has rejuvenated and expanded its fish-dependent economy. The Iceland Ocean Cluster works across business sectors to maximize the beneficial use of the entire Icelandic cod (hence “100% fish“). As a result of this effort, the utilization rate of the Icelandic cod has increased from 40% when utilization was almost exclusively filets for human consumption (similar to whitefish today) to more than 90%, including high-value byproducts such as skin and collagen that are processed into a variety of food and non-food products, raising the value of each fish from about $12 to $3,500. Significant benefits could similarly flow from greater utilization and reduced waste of the whitefish catch.

David Naftzger, Executive Director for the Great Lakes St. Lawrence Governors and Premiers, said, “There is tremendous potential for Great Lakes whitefish. Beyond this, 100% fish can help create more value and benefits from lake trout, walleye, yellow perch and other species in our region. This is just the tip of the iceberg and we look forward to the work to come.”

The 100% whitefish project is being coordinated by a diverse project team including representatives from the following:

More information on 100% whitefish is available at www.gsgp.org