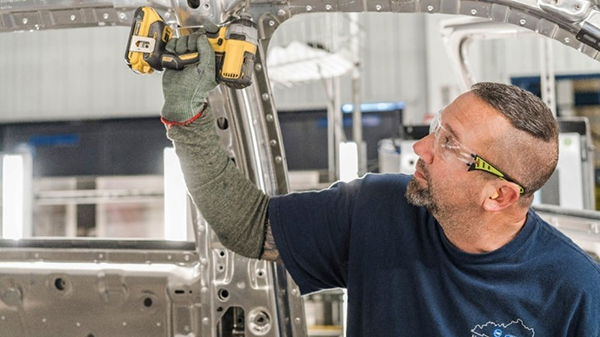 The new investment in Kentucky — part of the company’s Ford+ plan for growth and value-creation – will support an all-new F-Series Super Duty pickup built at Ford’s Kentucky Truck plant in Louisville.

“Ford is America’s No. 1 employer of hourly autoworkers, and our workforce in Kentucky makes some of the country’s most popular vehicles, including the F-Series Super Duty for both retail and Ford Pro commercial customers,” said Kumar Galhotra, president, Ford Blue. “Ford has been growing in Kentucky since the days of the Model T, and we are continuing to invest in the Bluegrass State to produce great vehicles that our customers love and depend on.”

Kentucky Gov. Andy Beshear proclaimed today to be “KenTRUCKy Day” in honor of Ford’s investment in Kentucky and tonight’s reveal of the all-new F-Series Super Duty tonight at Churchill Downs.

“The partnership between Kentucky and Ford goes back more than a century and is only becoming stronger,” Gov. Beshear said. “Today’s announcement is one of the largest investments ever in Jefferson County and will create hundreds of great jobs, including building the 2023 Ford F-Series Super Duty Truck. Together with last year’s record-shattering electric vehicle battery plant announcement, Ford is building its future here in the commonwealth. We couldn’t be more proud and look forward to many more decades of success for this iconic American company here in Kentucky.”

Ford is the top assembler of vehicles in America and the F-Series pickup franchise alone generated nearly $40 billion in revenue last year, more than the global revenue of Coca-Cola and Starbucks. F-Series Super Duty on its own generates more revenue than major companies such as Southwest Airlines, Marriott International or Nordstrom.

“UAW Local 862 members are proud to be a part of the F-Series Super Duty’s success both today and tomorrow,” said UAW President Ray Curry. “We celebrate this $700 million investment into Ford’s Kentucky Truck Plant, as it shows that UAW members continue to play an important role in Ford’s future.”

Ford employs more than 12,000 people in Kentucky and supports nearly 120,000 direct and indirect jobs in the state and a state GDP contribution of $11.8 billion.

“Advanced manufacturing continues to drive significant economic growth in Louisville,” said Louisville Mayor Greg Fischer. “Built upon a rich manufacturing history, Louisville has developed a strong foundation of support that allows us to meet manufacturers’ workforce and growth needs and has led manufacturing companies to invest more than $5.2 billion in our city and create more than 10,000 new jobs since 2014. We are excited to add today’s announcement to those growing numbers. Thank you to Ford for remaining committed to Louisville for nearly 110 years and continuing to invest in and grow its local operations and workforce.”

“This investment recognizes that UAW members bring quality, skills and experience to their jobs every day and that Ford counts on them to build their future business,” said Chuck Browning, UAW vice president and director of the Ford department. “Our members put Kentucky on the map when it comes to auto manufacturing and that imprint will only grow larger.”

Ford, America’s truck leader, is celebrating 45 years of F-Series as the best-selling pickup in America and the 25th anniversary of Super Duty with the all-new 2023 Ford F-Series Super Duty. The next-generation Super Duty takes America’s most trusted heavy-duty truck to the next level with unprecedented levels of work capability, ingenious new technology and a suite of cloud-based services for new levels of productivity. It will be revealed today at 7:15 p.m. EDT at Churchill Downs, home of the Kentucky Derby.

Ford is expanding its presence in Kentucky with the BlueOval SK Battery Park, a new, $5.8 billion, 1,500-acre battery manufacturing complex powering next-generation electric Ford and Lincoln vehicles. The joint venture with SK On will create about 5,000 new jobs.

The Ford F-Series Super Duty is proudly built at Kentucky Truck Plant alongside the Ford Expedition and Lincoln Navigator in Louisville, Kentucky, while the Ford Escape and Lincoln Corsair are built at the nearby Louisville Assembly Plant.