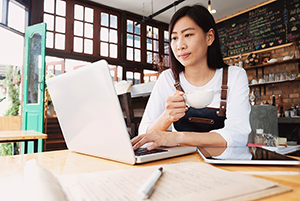 • The Consumer Price Index increased by 0.5 percent in December.
• The National Federation of Independent Business’s Business Optimism Index inched up in December.
• Mortgage Apps for Purchase increased in early January.

The headline Consumer Price Index increased by 0.5 percent in December, stepping down from the huge 0.9 percent gain in October and the slightly less huge 0.8 percent gain in November.

In December energy was a slight drag in inflation with the energy price index easing by 0.5 percent after two strong monthly increases this fall. The food price index gained a warm 0.4 percent for the month, its smallest monthly increase since August. Excluding food and energy, core CPI was up 0.6 percent in December, in line with gains in October and November. New and used vehicles prices are still putting pressure on inflation. As supply chain strain eases through this year, that element will moderate. Apparel prices also added to consumer inflation in November and December.

With a tight labor market and hot prices, the Federal Reserve will execute a series of maneuvers this spring, first stopping gains to their balance sheet, then increasing short-term interest rates, then allowing their balance sheet to decline. The hot inflation numbers and the upcoming maneuvers by the Fed show that this remains a highly unusual economic environment fraught with risks even with strong overall growth.

According to the National Federation of Independent Business, small business optimism increased in December despite hot inflation and surging COVID cases. The increase was small, and the index remains stuck at a weak level, but it is encouraging to see a gain given the conditions.

Mortgage applications for purchase increased by 2.2 percent for the first week of January, after a big 10.2 percent decline in the last week of December. On a four-week moving average basis, purchase apps were down 10.2 percent in early January from the equivalent week a year ago. Refi apps were little changed, down 0.1 percent in early January and were down 42.7 percent from a year ago. According to the Mortgage bankers Association the rate for a 30-year fixed rate mortgage increased to 3.52 percent.

Market Reaction: U.S. equity markets opened with gains. The yield on 10-Year Treasury bonds eased to 1.73 percent. NYMEX crude oil is up to $81.98/barrel. Natural gas futures are up to $4.17/mmbtu.