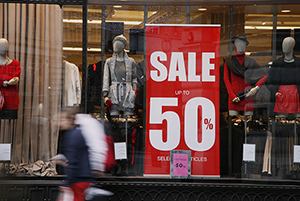 We already knew that unit auto sales fell to a 12.4 million unit rate in December due to tight supply. Today’s report shows that the nominal dollar value of auto sales fell by 0.4 percent for the month. Lower gasoline prices also pulled down nominal sales as gasoline station sales dropped by 0.7 percent in December. But outside of the obvious mechanics of auto and energy, other key categories were weak as well, most of them discretionary purchases.

Furniture sales dropped by 5.5 percent in December. Electronics were down 2.9 percent. Clothing store sales fell 3.1 percent. Sporting goods lost 4.3 percent. All in, a very weak report showing the drag of COVID-Omicron on the U.S. economy. Another factor was expected fiscal tightening as the child tax credit payments are set to expire this month unless extended by Congress.

The Import Price Index fell by 0.2 percent in December as energy prices eased. We expect to see the reverse of that in the January numbers. A firming value of the dollar will help moderate import price gains early this year. With the Federal Reserve executing a quick pivot from highly accommodative monetary policy to tightening policy this spring, foreign exchange markets may see increased volatility, impacting the dollar prices of imports to the U.S.

U.S. industrial production eased by just 0.1 percent in December. Mining output increased by 2.0 percent, consistent with the uptrend in the drilling rig count. Utility output fell by 1.5 percent with the warmest December on record for the U.S. Manufacturing output fell by 0.3 percent in December after rising through October and November. Vehicle assemblies fell back from a 9.58 million unit annual rate in November, to 9.28 in December. We look for gradual improvement in vehicle production and sales this year.

Market Reaction: Equity markets opened with losses. The 10-year Treasury yield increased to 1.76 percent. NYMEX crude oil is up to $82.85/barrel. Natural gas futures are down to $3.98/mmbtu.