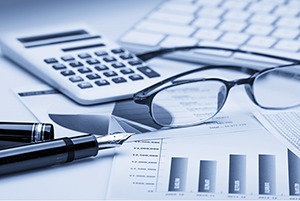 The economic shocks from Russia’s invasion of Ukraine are reverberating far beyond the tragedy unfolding in that country, with effects extending to the United States. The U.S. has little direct trade with the Ukraine and Russia, with exports to them collectively accounting for less than 0.05% of U.S. GDP. The drag on exports to the European Union may be more impactful but will probably still be small. With the West imposing severe sanctions, Russia could throttle back on energy shipments to the European Union, weighing on its economy and reducing E.U. demand for U.S. exports. U.S. exports to the E.U. account for just under 2% of U.S. GDP, so an E.U. downturn could shave one or two tenths of a percent from U.S. real GDP growth in 2022.

The U.S. economy’s indirect exposure to the crisis is more substantial. Russia is the world’s second largest producer of oil and natural gas; global energy prices surged as Russia prepared to invade, pushing U.S. energy prices higher as well. WTI crude is up from under $70 per barrel in December to over $93 after the invasion began, up 50% in year-over-year terms. Trends in other energy commodities are broadly similar. Surging energy prices will keep inflation well above the Fed’s target in 2022 after it reached a four-decade high in 2021. Comerica Economics will revise our forecast for CPI inflation higher in the March U.S. Economic Outlook.

The energy price shock is a headwind to U.S. growth as well. The more consumers spend to keep gas tanks full, and homes heated, the less they can spend on other goods and services. Energy price shocks can be very bad news for the economy; they contributed to the 2008-09 Great Recession, the recession of the early 1990s, and the double-dip recessions of the early 1980s. Fortunately, there are positives for consumer spending this time around that should largely offset the drag of surging energy prices.

American households are sitting on over $2 trillion dollars in excess savings they accumulated in 2020 and 2021, when restrictions on spending and fear of the virus pushed the saving rate much higher than historic norms. Consumers have much more wealth from home equity and stock holdings than before the pandemic. So they are better positioned to absorb an energy price shock than, for example, in 2006-2008, when energy prices jumped, and consumer balance sheets were much more stressed than today. The 2022 energy price shock will probably shave another few tenths of a percent off of real GDP growth this year, but growth this year should still exceed 3%. That is fast enough to push the unemployment rate back down to its pre-crisis level by year-end.

Even before the Russian invasion, the Fed was pivoting rapidly to withdraw monetary stimulus. Most indicators for the labor market showed that it was already close to meeting  the Fed’s definition of maximum employment, and inflation soared to a 40-year high in early 2022. The labor market will probably improve a little more slowly because of the Russia-Ukraine war, but it is already in good shape, and inflation will exceed the Fed’s target even longer than seemed likely at the start of 2022. On net the case for withdrawing monetary stimulus in 2022 is arguably even more compelling than before the war.

At the same time, the economic impact of this crisis is highly uncertain. It will depend on the war’s duration, its effects on energy markets, whether other nations enter the conflict, and other unforeseeable factors. The Fed will want to balance the urge to rapidly withdraw stimulus with the urge to wait for a clearer understanding of how the crisis is affecting the U.S. economy. These competing urges raise the bar for the Fed to hike the federal funds rate a half percentage point at their next scheduled decision March 15 and 16, which Fed watchers had been speculating was possible a few weeks ago.

Instead, the Fed’s path of least resistance is to raise the federal funds target rate a quarter percentage point at their March, May, and June meetings, while watching the Russia-Ukraine crisis play out. If the conflict’s drag on the U.S. recovery is limited, the Fed is likely to make additional quarter-percentage point hikes at the September and December meetings. This implies a most-likely path for the federal funds rate target to rise to a range of 1.25% to 1.50% by year-end 2022. Financial markets price in another 0.25% to 0.50% in rate hikes on top of Comerica’s forecast, but markets also price in the Fed raising rates so aggressively through 2024 that they reverse course and cut rates in 2025 (See chart in the published report). The Fed is more likely to hike a bit slower than markets anticipate to avoid an economic soft patch that would force them to quickly reverse those hikes.

The course of monetary policy is considerably more uncertain than prior to the Russian invasion. The bigger the conflict gets, the larger the impact will be on global energy supplies, the larger the drag will be on the European economy, and the larger the potential drag on U.S. exports and consumption spending will be.