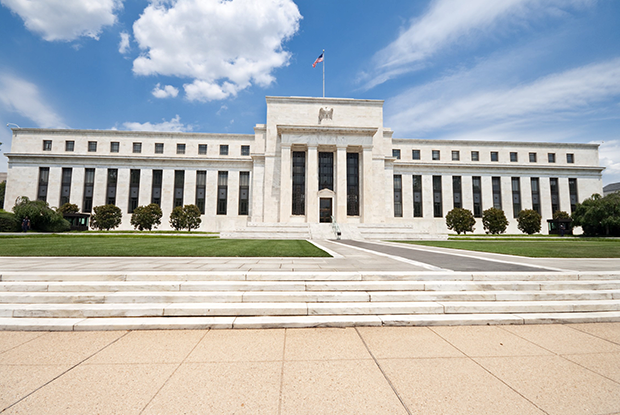 The April U.S. Economic Outlook substantially raises forecasts for interest rates in 2022 and 2023 in reaction to recent changes to the Federal Reserve’s guidance. At the Fed’s March 16 meeting, the Federal Open Market Committee (“FOMC”—the policymakers who set interest rates) signaled they are prepared to raise interest rates to a restrictive level, high enough to slow growth to below the economy’s long-run potential, to bring inflation back down.

The Fed’s plans to tighten policy seem credible, even at the cost of weakening growth. FOMC members feel burned after the Fed’s professional forecasters woefully underestimated the intensity of inflation in late 2021 and early 2022.  Their forecasts assumed that supply-side bottlenecks pushing up inflation—supply chain turmoil, low labor force participation, chip shortages—would ease by late 2021 and bring inflation down. But they haven’t, and inflation hasn’t either.

Chair Powell now says the FOMC “will be looking to actual progress on [resolving economic bottlenecks] and not assuming significant near-term supply-side relief.” A more data-dependent monetary policy means faster tightening since the data show so much inflation—and inflation will get worse before it gets better due to the Russia-Ukraine shock and renewed lockdowns in China. The Fed is also concerned that labor demand is outstripping supply. The sum of job openings and current employment is up by 3 million since early 2020, while the labor force is roughly unchanged.

In light of this, Comerica forecasts for the Fed to raise the federal funds target by a half percentage point at their next two decisions in May and June, and by a quarter percentage point at the July, September, and December decisions. The forecast anticipates two more quarter-percentage-point hikes in the first half of 2023. By the second half of 2023, that would put the federal funds target above its peak in the last expansion, when higher interest rates contributed to a drop in residential investment, industrial production, and  job openings—in other words, restricted economic growth.

Longer-term interest rates are likely to rise less than short-term rates. This is despite the Fed beginning to unwind purchases of government-backed securities made during the pandemic, a.k.a. QE. Beginning at the May FOMC meeting, the Fed will probably start reducing bond holdings by accepting repayment on a portion of the maturing bonds.

As the Fed reduces bond holdings, the Treasury will need private investors to buy more government bonds to roll over the federal debt and finance new borrowings. All things equal, more bond supply tends to push bond prices lower and bond yields higher. But, while monetary policy will be pushing longer-term interest rates up, the business cycle will be pushing them down. Economic growth will slow as inflation eats into consumer spending power and businesses finish rebuilding inventories. Oil prices will likely stabilize once the Russia-Ukraine conflict cools.

As economic growth slows and commodity prices come back down, wage growth and inflation should cool as well. These factors are likely to mostly offset the Fed reducing the size of its bond holdings, limiting the rise of longer-term interest rates.