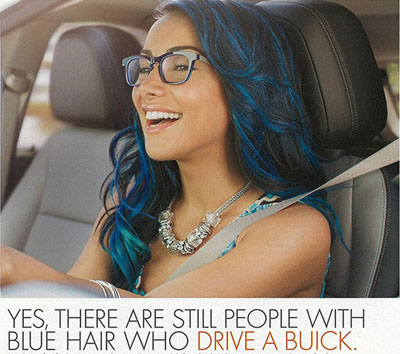 Maybe your logo is looking a bit scruffy. Perhaps your image is a bit dull. How do you wake up a longtime brand to a new – and perhaps younger – audience?

That was the challenge before General Motors Corp. when it decided to relaunch its well-known Buick brand. Everyone knew of the signature car line, but they had a certain look and feel in mind when they heard its name, noted Tony DiSalle, U.S. Vice President of Buick and GMC Marketing.

DiSalle spoke about the brand’s new campaign as a guest at the Adcraft Club of Detroit, which holds an annual “GM Day” for its members. More than 400 shows up at the Detroit Marriott at the Renaissance Center to hear about Buick’s plans for the future, including his thoughts on the brand’s successful relaunch, “Experience the New Buick.”

DiSalle began his career with GM in 1988. His current role involves providing senior leadership and strategic direction for U.S. Buick and GMC marketing functions such as marketing, communications and product strategy. DiSalle accepted his current position in 2011 and has held numerous management positions within GM, including product and marketing director of the Chevrolet Volt as well as standing as vice president of sales, service and marketing for OnStar.

So how did Buick do it? Here are some highlights of DiSalle’s comments:

– Buick wanted to be both luxury and approachable, DiSalle said. They wanted to have a warmth to their campaign, bringing Buick to multiple generations.
– Many consumers had a “false familiarity” with the Buick brand, DiSalle said, meaning that they thought they knew what it looked like. So a big part of the new campaign was getting people to really focus on the current cars, having commercials where people seemed surprised to know the handsome car they were looking at was a Buick.
– Buick used a “three-prong strategy” to get those eyes on the cars, DiSalle said. The three steps were 1) Consistent advertising, 2) Extending the Buick message across mediums and consumers and 3) Creating a strong product and customer experience, especially within the Buick dealerships.
– A big part of the “Experience the New Buick” ads is humor, DiSalle said. Humor as well as “unexpected surprises,” like fun, spirited ads made consumers look at Buick in a new light – and visit their dealerships to see more, he noted. One of the more successful billboards Buick used to highlight many of these techniques was a photo of a young woman in a Buick with bright blue highlights in her hair. That picture had the tagline,” Yes, people with blue hair still drive Buick.” Juxtaposing youth with Buick’s supposedly staid image brought the car brand back into modern day and in front of Millennials and other potential buyers.

Established in 1905, the Adcraft Club of Detroit brings together members of the media, advertiser and agency community to exchange big ideas, support and educate one another as means of evolving their own professional development and the creative industry they are a part of. With 1,600 plus members, the Adcraft Club of Detroit houses some of the most well-respected and established consumer brands in the world.

“GM Day is something we look forward to every year as an opportunity to learn about the marketing plans for one of our industry’s biggest influencers,” Phil Rzepka, Adcraft President and Senior Vice President, Head of Digital for Carat, said. “We are proud of the special relationship we have with the auto industry and of our ability to provide our members access to the latest marketing and advertising strategies.”