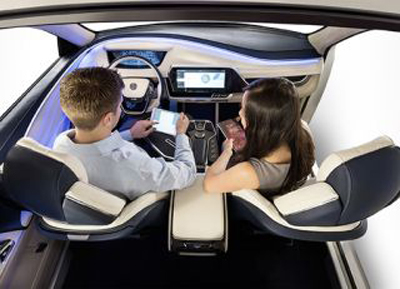 For the next two weeks, pretty much everyone in or near Detroit goes car crazy because of a little get-together known as the 2015 North American International Auto Show.

Some of the most exciting announcements for the few who aren’t car savvy have to be the cool new features that companies are adding to our vehicles. Johnson Controls developed what it called an “Innovation Demonstrator” or ID15 concept, which shows off what an interior could be like in autonomous driving situations (cars that drive themselves, basically). “The design and development of this concept is based on the interior changes that are necessary to adapt to the autonomous driving experience,” said Han Hendriks, vice president, advanced product development and sales, Johnson Controls Automotive Interiors. “The ID15 focuses on meeting consumers’ expectations, as our customers look to us as an industry leader to help define the interior of the future.”

Here are some highlights of what they created:

• Rotating table – located in a redefined floor console, combined with an 18 degree swiveling seatback, the table allows the driver to engage in activities and more comfortable interaction with second row passengers. • Smart surface technologies – integrated control technologies enabling activation and control of various functions throughout the interior to provide an appealing and higher level of craftsmanship, and serve as an alternative solution to conventional switches.

• Illuminated surfaces – to differentiate the experience within the interior of the vehicle, LED lighting across the instrument panel and along the side of the doors helps improve the lighting ambiance throughout, while synchronized functionally to the Auto-drive mode.

• Tambour door – a new solution to storage in the door panel that provides private, secure storage in the front and rear door panel, and an ergonomically accessed storage space in the center console. • Catch bin – a removable bin allows passengers to easily retrieve small items that fall between the seats and floor console. Also included in the ID15 concept are enhanced seating capabilities. Giving the driver the ability to more conveniently interact with passengers in the front and rear rows, while in autonomous mode, the “Swingback” feature holds the seat in its standard fixed position, while the upper seatback pivots 18 degrees.

In addition, the rear seat features a mode, where with the press of a button, the seat reclines, and brings up the leg rest and foot rest. Simultaneously, the front passenger seat moves forward to create extra leg room. The seats in ID15 were developed for the Chinese market by the Yanfeng Johnson Controls (YFJC) automotive seating joint venture.

An event sponsor and exhibitor, this is the 21st year that Johnson Controls is involved in the NAIAS. The NAIAS opens to the public Jan. 17 through Jan. 25.