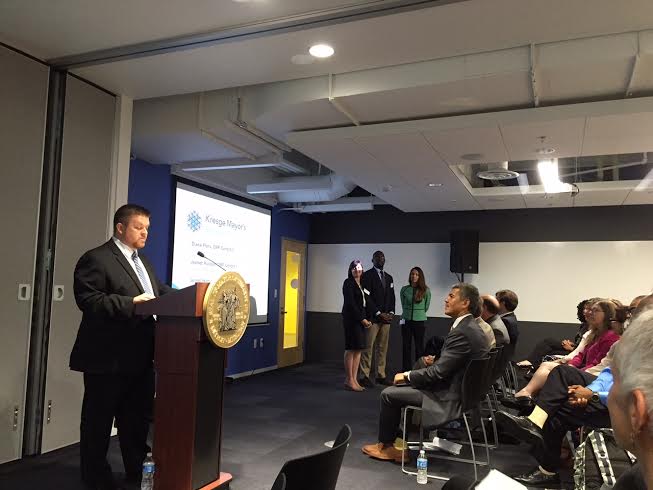 It can be near to impossible to change careers midstream, especially with the high costs of going back to school or starting over as a newbie. But a Detroit-based fellowship is giving mid-career professionals a chance to sharpen their skills and give back at the same time. The program is called the Detroit Revitalization Fellows. Not only is this a unique program in terms of giving young (and young at heart) professionals an opportunity to grow alongside Detroit, it also is a practical way to attack some of the city’s most sizable issues with substance.

In its third cohort of this program, a group of 23 individuals and companies will examine big-picture projects ranging from transit to technology to homelessness to neighborhood development. These aren’t people who are afraid of challenge. Rather, they embrace it, they study it, they slay it.

On Monday, the Detroit Revitalization Fellows, Wayne State University, the Kresge Foundation and Mayor Mike Duggan’s office announced a new twist to the program. This year, three alums will return to the Fellowship and take on special tasks within the Mayor’s office. These “Kresge Mayor’s Fellows” will add new muscle to Duggan’s workforce, putting three well-known and well-respected professionals in front of three mighty challenges.

This is about momentum, said WSU President M. Roy Wilson. It is about energy, talent and commitment to Detroit, said Kresge Foundation President and CEO Rip Rapson. It is about accelerating Detroit’s growth, said Mayor Duggan. It is about civic, community and economic development, said Graig Donnelly, Detroit Revitalization Fellows Director. Donnelly said this year’s group has a great mix of people who have both personal and professional life experience. Nearly 75 percent are female. About 42 percent are between the ages of 25 and 34. About 47 percent are African American. That means they’re young, they’re smart and they’re ready to take everything they’ve learned so far as well as the career development they’ll gain as Fellows and apply it to Detroit.

“Our value proposition is that long game; we’re building our next leaders for our city and our region,” Donnelly said. “The people who are (Detroit Revitalization Fellows) are at the forefront but they’re also behind the scenes, making the important things happen that affect all of our quality of life. That’s why we’re making this investment – so they’re equipped to lead us well into the future.”

Some background. The 2015-2017 Detroit Revitalization Fellows will serve two-year appointments in both public and nonprofit organizations in and around Detroit. These groups have one thing in common: They all are focused on Detroit’s rebirth and the region. Each one will take one a project with his or her employer in hopes of pounding out solutions to local and regional issues.

The 23 fellows come from as near as, well, Detroit to as far as San Francisco. This year, the Detroit Revitalization Fellows had its highest applicant pool in its four-year history; more than 650 people wrote up their best qualities in hopes of securing a spot in the prestigious fellowship. The program was inspired by the Rockefeller Foundation’s CUREx Fellowships, started in New Orleans after Hurricane Katrina to attract urbanists from across the country to help rebuild the city. Fifty-one Fellows from across the United States, including native Detroiters and Michiganders, have participated in two successive cohorts since the program began; 23 Fellows in the third cohort began their service this month.

For more information about the Detroit Revitalization Fellows, visit detroitfellows.wayne.edu.