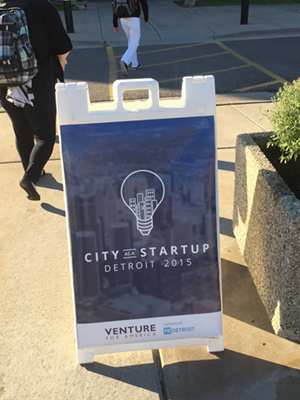 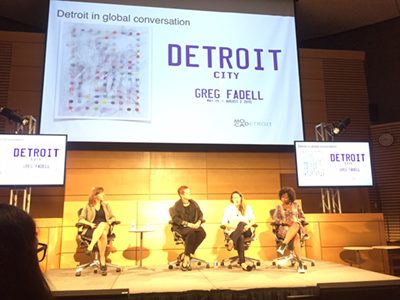 Here’s something you don’t expect to hear out of a CEO’s mouth: That without Detroit’s neighborhoods taking part in the city’s overall revitalization, the whole downtown will tumble.

It’s one of those things that when you attend a conference like Wednesday’s Venture for America “City as a Startup” that makes you do a double take. Like, did Dan Gilbert really say? What does that mean? Could I get some more information about that?

But, indeed, that’s exactly what Mr. Gilbert told the audience of Millennial Venture for America Fellows and hangers on, like me. He was one of the impressive lineup of speakers who attended the annual event, which hopes to illuminate how cities are much like startup companies – they need the right funding, support and mentorship to launch. 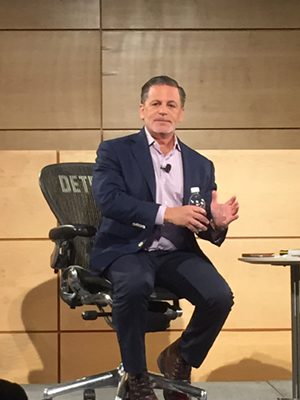 Gilbert sat alongside Detroit bigwigs including Kresge Foundation CEO Rip Rapson, Detroit Mayor Mike Duggan and many more community activists who are huge Detroit supporters in their own right. The conversations that took place Wednesday were real, genuine and full of revelations about how these leaders feel about the city, Detroit’s overall potential and what they’re doing to promote it.

Some background: In its second year, City as a Startup (CaaS) is described as “a conference that brings together leaders from startups, the public sector, and beyond, for a conversation on the intersection of urban development and emerging technology.”

During CaaS: Detroit, the Venture for America community learns firsthand from presentations and working sessions led by thought leaders and on-the-ground doers, share insights, and strengthen collaborative networks across industry and geographic borders. 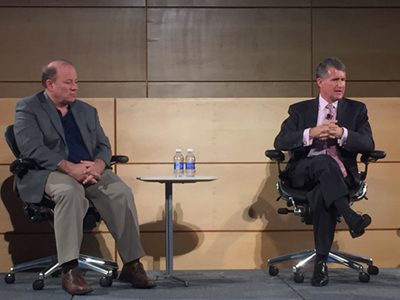 • Gilbert talked about his early career at Quicken Loans – and even before that. Like when he sold pizza from his home, doing so well that the police shut his business down when a neighboring pizza parlor complained. The hands-on manager (he still teaches company-culture classes at Quicken Loans for new employees) said he has a base criteria to judge an entrepreneur. He goes with his gut – he asks himself: “Do they get it?” That feeling, he said, is more important in some ways than the product itself. “I’m betting on the jockey, not the horse.” He noted how Detroit has inspired his investment, which is both good in terms of the financial potential as well as in the give-back aspects of it. He expects M-1 Rail to change Detroit, and he’s looking forward to a big pop for the city once one of the early startups finally hits it big, which he said will happen.

• Rip Rapson of the Kresge Foundation offered one of the best descriptions of how philanthropy is helping get Detroit past its bankruptcy and into a brighter future. He described the financial support Kresge and other groups are offering as the “scaffolding” that will bring Detroit forward. He noted that he is open to big ideas and adventuresome pitches when it comes to reinvestment in Detroit. He believes that housing, business and philanthropy must work together to bring the neighborhoods back, shaping a Detroit that benefits both newcomers as well as the more than 700,000 people who are there now, living and working toward a better Detroit in real and meaningful ways.

• Mayor Mike Duggan proved again that he is a forward-thinking government official when he noted that he looks to Millennials and others to guide him in what needs to happen next in Detroit. Rather than force his ideas onto the city, he said he’d rather see what kind of paths people are taking and follow that lead. Duggan also spoke to how he is working with outside thinkers, including Mike Bloomberg, to come up with ways to improve Detroit. Traffic control and how to incorporate bikes and other transportation in the city is one key way that will happen, Duggan noted. 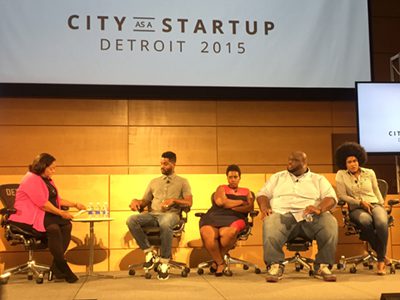 • The panels of bright, wonderful community leaders also proved hugely interesting. There was Jenenne Whitfield, Executive Director of The Heidelberg Project, who noted that not only does the city need its artists, it needs people who love art to believe in Detroit in other ways. They need to not only attend events, but they need to buy art, invest in the artists and get involved across the board. James Feagin, Outreach Consultant for the Detroit Economic Growth Corporation, also had great perspective on how Millennials and others can approach their brands in terms of having heart, soul and money in mind when they go forward. For example, Feagin noted that you always have a mission – that rarely changes when you launch your idea into the world. But your strategy and tactics need to be flexible as things change or new opportunities open up.