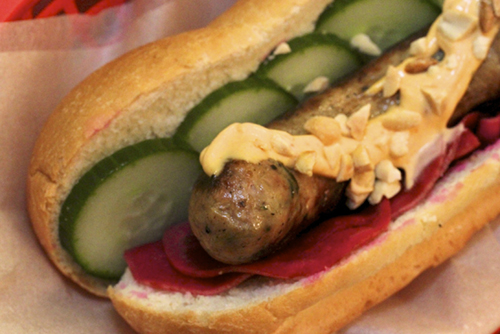 There are few things as all-American as grilling for the Fourth of July. And there are few things we as a staff love as much as tasty meats and Michigan craft beer. So we thought a recipe or two for the holiday that mixes all of our favorite stuff would be just right for the upcoming weekend. Thankfully, Powers Distributing and Will Branch, owner and charcutier of Detroit’s Corridor Sausage Co., agreed to help. They have put together two new recipes using craft beer, helping kick off summer in the right and delicious way.

“Summer grilling season might be the perfect time of year to experiment with beer to enhance the flavor of your meats and sauces,” said Branch, a Ferndale resident.

Some background: Powers Distributing is a family-owned company based in Orion Township. Powers was established in 1939 and is currently owned and operated by company co-presidents Robert and Gerald Powers. Powers Distributing has more than 200 employees and 45 trucks managing 85 brands through 30 different supplier relationships across Oakland and Macomb Counties.

Branch is the co-founder of Corridor Sausage Co. in 2009. He and Zachary Klein are known for creating handcrafted and artisan meats and selling them at Eastern Market and other area locations. They use all-natural, hormone- and antibiotic-free proteins as well as only fresh herbs and spices in their creations. Branch has a B.A. in English from Michigan State University but chose culinary school, training across Michigan, New York and Paris before coming back to Detroit.

Here are their tips for summer barbecuing: