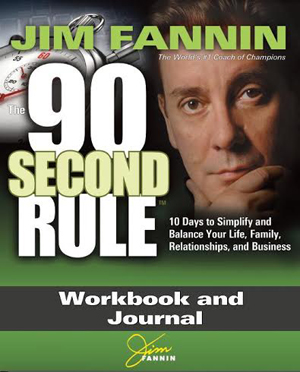 “We’re a nation of strivers,” said Jim Fannin, a success coach who has been coaxing peak performance from blue-chip professional athletes, Olympians and C-Suite executives from many of America’s best-known companies for more than 35 years. “The great tragedy is that so many Americans of genuine ability never ask themselves the single most important question that would help make them happier at home and more productive at work.”

Those hungry for success would be wise to consider what true champions do differently than their less successful counterparts, he insists. Fannin also is the author of S.C.O.R.E. for Life, Pebble in the Shoe and 90-Seconds To A Great Relationship and the creator of the 90-Second Rule thought-management system.

“What surprises many is that an average performer can become outstanding by strategically investing just 3 percent of his or her day in focused 90-second bursts,” said Fannin, who developed many of his 90-second tools and techniques while coaching seven professional tennis players – top world ranking – to use the minute and a half between sets to get in the Zone. • The 90-Second Rule After Being Apart: Whenever you have been away from someone you care about for more than two hours, give him or her your focused attention for the first 90-seconds you are together. Look into his or her eyes long enough to discern their color. “Ninety seconds given to a spouse the moment you come through the door is as powerful as hours spent together later,” Fannin said.

• Breathe Like a Baby: When you need to clear your mind and slow the game down, use this technique. Unhinge your jaw. Relax your shoulders. Place your palm on your stomach, inhale and exhale deeply. Feel the tension melt away as you count your breaths for 90 seconds.

• Go to Higher Ground: True champions do not let challenges in one arena of life affect performance in the other arenas. “Going to higher ground is a focused, 90-second weekly review of the written goals for each area of your life so that you have clarity and keep challenges in perspective,” Fannin said.

• Isolate the Essential Skill: True champions think deeply about their craft so that they can enter the Zone. “The essential skill for a hitter in baseball is to hit the ball solidly with the barrel of the bat so that the ball gets past the defense before they can field it,” Fannin said. Because they have isolated the key skill, every baseball player Fannin coaches steps into the batter’s box and uses a simple affirmation. Just ask recent Hall of Fame slugger Frank Thomas and he’ll respond, ‘I hit solid.’

• Be the Palm Tree: When seconds count, this tools works. True champions must sometimes absorb negative energy to stay in the Zone. “In the winds of a hurricane, the palm tree bends, but it does not break,” Fannin said. “By visualizing a palm tree staying strong in the rain, a champion can keep harmful emotions in check.”