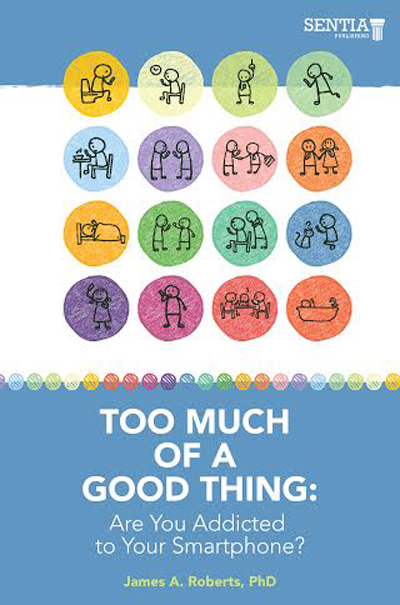 You’ve tried to escape it. You really have. But, the constant stream of dings and buzzes from incoming texts and emails are just too much to take. And, before you know it, you’re scanning your smartphone. Again.

Can the cycle be broken? Can people really put down their smartphones? James Roberts, Ph.D., The Ben H. Williams Professor of Marketing in Baylor University’s Hankamer School of Business, says it’s possible if people take the proper steps to curb their use.

“It’s all about finding your ‘digital sweet spot,’ that magical place where you are still plugged in but have carved out time for the things that really matter,” Roberts said. “You, your relationships and community are the bedrocks of living a happy and meaningful life. They are also the first things that suffer when our lives get out of balance.”

Roberts is a nationally known expert on materialism and smartphone addiction. He recently published the new book, “Too Much of a Good Thing: Are You Addicted to Your Smartphone?” He is also the author of the book “Shiny Objects: Why We Spend Money We Don’t Have in Search of Happiness We Can’t Buy.”

Here are some of Roberts’ tips on breaking your smartphone addiction:

1. No smartphones while driving. “This is by far the easiest tip to implement and also the most important. Simply toss (place gently) your smartphone in the trunk of your car before you leave. It’s out of sight but probably not out of mind, but at least you’re not texting while driving. Don’t get me started on the fallacy of multitasking and hands-free devices. You’re dangerous when you are driving and on the phone – hands-free or not.”

2. Establish “smartphone-free” zones and times. “Smartphones should be forbidden in certain places at home and work,” Roberts said. “How much productive time is lost at work due to people fiddling with their smartphones? Designate two or three times during the day when you are allowed to check your phone for messages, updates or other goodies that might need your attention. You will be the rock star of the office as your productivity skyrockets after curbing your cellphone ‘jones’ – that’s 70s talk for addiction.” 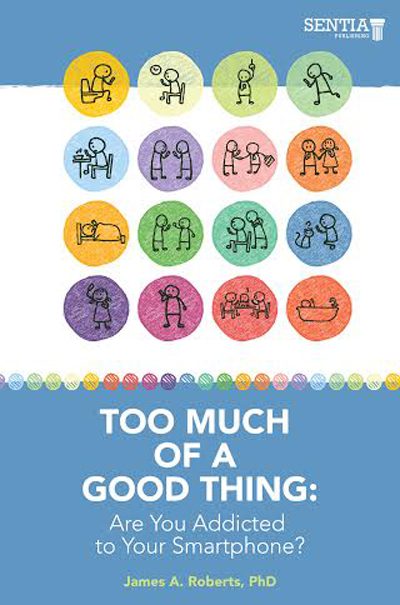 3.  Don’t buy into the “Hair of the Dog” myth. “I call this ‘Hair of the Dog’ because I am pitting technology against technology. There are a number of smartphone apps that you can use that monitor and control your smartphone use. Spending too much time on eBay? There’s an app for that. You can set time limits for anything on your smartphone that is particularly distracting or time-consuming. You can even have your smartphone text your spouse with updates on how much time you’re spending on social media. Digital shaming. What will we think of next?”

4. Use airplane mode. “Airplane mode is a nice compromise. It allows you the safety of having your phone with you in case of an emergency but also allows you to focus on the task at hand with no cellular interruptions. Did you know that the average American has an attention span of 8.5 seconds, which is shorter than the attention span of an everyday, garden-variety goldfish?”

5. Put out a contract on yourself. “Social contracts are a great way to change behaviors. Simply write a contract that states explicitly what is acceptable or unacceptable use – and the punishment for such behavior – of your smartphone and enlist your spouse, significant other, and/or kids to be the enforcers. If your kids or spouse are like mine, they will not hesitate to let you know when you are breaking the rules and what the said punishment is for such behavior.”

6. Nix using your smartphone as an alarm clock. “It’s too much of a temptation to check for the latest YouTube cat video before you start your day. No smartphone until you’ve showered, had your morning cup of Joe and made your bed.”

7. Go the “dumb phone” route. “When it comes down to it, all we really need to be able to do on our phones is make and receive calls – and send texts, if you have teenage daughters. E-mail and social media are nice, but the dumb phone at least keeps us safe (the long-forgotten original purpose for cell phones) and is able to help us connect with those we need to. Or, how about simply using a block of wood carved in the shape of a smartphone whose sole purpose is to comfort you when you are experiencing withdrawal symptoms? It’s the same principle as pulling out a stick of gum when you’re trying to quit smoking.”

8. Commit to it and do it. “All of the above suggestions will come to naught if you are not totally committed to the cause. You must convince yourself that curbing your smartphone use is essential to your happiness before you embark on this journey. Without such steely resolve you will be sucked into the digital vortex that has lured so many of us into an existence where leading a meaningful life has been replaced by the continual pursuit of momentary pleasures.”