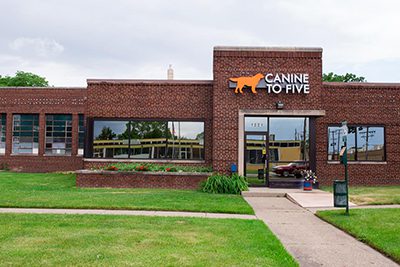 Canine to Five has been a dog-done good company for pet owners, first opening in Detroit and then in Ferndale as the premier place for dog daycare, boarding and grooming. Now, Liz Blondy’s business has innovated again to add something pet owners might not have even realized they needed until now.

On Jan. 4, at 6:20 a.m., exactly one week before the world convenes in Detroit for the North American International Auto Show, Canine to Five debuted what Blondy called “ the ultimate in dog daycare convenience vehicles” – something she describes as the Detroit Puppy Mover.

Equipped with the comfort and security features for safe and pleasant dog transport – and driven with the same care and attention that dog owners have come to expect from the longtime Cass Avenue daycare facility – the Puppy Mover will make dog drop-off and pickup easier than ever.

Dog owners who work or live near the Puppy Mover route can simply drop their dog off at one of the scheduled stops to be driven to daycare in the morning, and pick their dog up at that same stop in the evening.

“It means less trips and less stress for our customers and their dogs on the way to and from work,” said Canine to Five Owner Blondy. “So, if you work at places like the DMC or Quicken or live in Midtown or Downtown, the Puppy Mover will come to you.”

Blondy is a long-time Detroiter who, after a decade in sales, decided to combine her love of animals and her hometown passion into a career. In 2005 she opened Canine to Five Detroit Dog Daycare in Midtown and she hasn’t looked back. 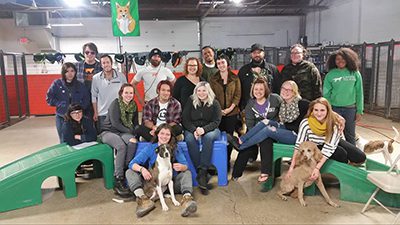 Canine to Five is now recognized as a Detroit small business success story, and Liz emerged as a staunch and prominent advocate for Detroit’s resurgence. Firmly convinced that small businesses are the key to true revival, she co-founded Open City Detroit, a networking group designed to encourage entrepreneurship, and participates in many initiatives to foster a strong grassroots business community.

To begin with, pickups will be made Tuesday through Thursday starting at 6:30 a.m. at DMC South Parking Deck, making stops back and forth between Canine to Five and other downtown locations throughout the morning. Evening drop-offs will begin at 5:40 p.m. and continue until 8:35 p.m. at locations such as Cadillac Square, DMC, Capital Park and Cadillac Square.

The first ride is $7 per trip; two or more trips enjoy a reduced cost of $5. And if pet owners buy nine trips, they can get one free. Canine to Five facilities include: 4,500 square feet of cage-free, indoor climate-controlled play space, 8,000 square feet of secured, fenced-in, well-lit outdoor play space as well as separate play area for puppies, small dogs and quiet time.

Dog owners who live and work in the city can find out more about Puppy Mover reservations and schedule at http://caninetofivedetroit.com, by calling 313-831-DOGS or by posting to Twitter, Facebook and Instagram with the hashtag #DetroitPuppyMover.

Since 1988 Corp! Magazine has been published in print form. Today we have pivoted our operations to 100% digital, with a reader-friendly digital flipbook, still delivered to this influential audience of seasoned executives and business leaders. This exclusive circulation ensures the highest quality, targeted audience for advertisers, with equal distribution across Michigan.
Contact us: [email protected]magazine.com
FOLLOW US
© Copyright 2022 - Corp! Magazine
Click to access the login or register cheese