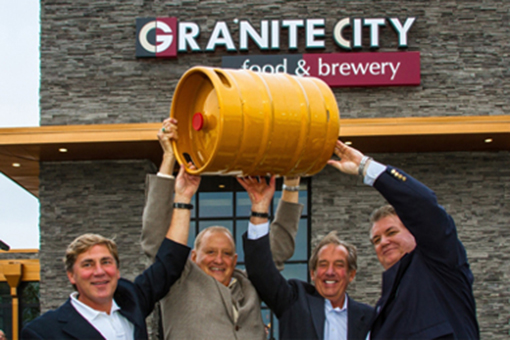 Bringing a growing national chain home was a highlight of the night for Steve Wagenheim as he christened the opening of Granite City Food & Brewery in Troy, Mich.

“We are so thrilled to be here in Troy,” said Wagenheim “I always wanted to come back, and now I’m back. We picked out this site 5 years ago.”

Wagenheim is president and founder of Granite City Food & Brewery, which just celebrated the opening of its 28th restaurant on May 4 at 699 W. Big Beaver Road. The restaurant and brewery officially opened May 8. The restaurant in the Detroit suburb is a longtime dream of Wagenheim and Chief Concept Officer Dean Oakey, who both grew up in the Detroit area. CEO is Rob Doran.

“Detroit is one of the greatest cities in the world for restaurants. It’s because of its authenticity,” said Wagenheim, who is a native of Oak Park and graduated from Michigan State University

The restaurant chain, considered upscale casual family, operates in 13 states and is based in Golden Valley, Minn. The restaurant features signature micro-brews made on site such as Duke of Wellington Ale and Broad Axe Stout. Dishes on its menu include London Broil with bourbon and caramelized onion sauce, Chicken Marsala, Grilled Salmon Oscar, Baked Reggiano Hash Browns, hearth oven and flatbread pizzas and much more. All offerings are made from scratch. The chain, focused in the Midwest and Tennessee also operates Cadillac Ranch All American Bar & Grill.

The publicly traded company has incurred losses since its inception and for fiscal year 2011 reported a loss of $4.6 million, according to its 10K filing. The chain lost $4.5 million in 2010. Concept Development Partners LLC acquired control of the company in May 2011 in a preferred stock transaction, according to the filing. Shares trade on Nasdaq under the ticker GCFB. The restaurant first opened in 1999. First quarter results are to be released May 8.

One of the distinctions of Granite City is its patented micro-brewing process called “Fermentus Interruptus” that allows it ship sweet liquid called “wort” from its central brewing facility in Illinois to individual sites. The fermentation process then begins upon arrival at the sites and the brewing process is completed.